Once upon a time, I saw an image on a travel blog of the writer sitting in elephant pants in a hammock, at just enough of an angle to show that she was well-accustomed to sitting on hammocks, with an open macbook on her lap. The hammock sliced through the frame diagonally, faded red stripes against the hot jungle green, fabric and palm fronds forming an “X” in the center of which she sat in casual solidity, smiling as if just interupted from a sunny storm or words.

When I think of writing abroad, this is the image that hovers in the back of my mind: the hammock and the writer, circling each other in still motion, their closeness enough to spark motion into the end of her fingertips, to propel her stories forward. All that is needed for success is a hammock and a view, and the time to write. X marks the spot. If I had this, I thought, the full stories would come. If.

Yesterday morning I stepped out of bed bloated with the sensation of feeling lost. My Australian work visa had not come through, and I had no idea how I would last on my summer savings until the time came for me to return to Alaska to work in the spring. My plans of forming a life around learning from the reef I had dreamed of since childhood had dropped away one by one, first as the jobs I had anticipated dissolved, second as the visa that would have allowed me to pursue other jobs evaporated. The ocean home I had hoped for disapeared before I even had a chance to step inside. Every road in the world was ready to usher me away, and for the first time in my life, that openess did not fill me with excitement, but only with dread.
There was nothing to do but to keep moving. In the full sun of Cairns noon I stepped into the welcome airconditioning of a free hostel shuttle that would take me to Port Douglas, Australia, a town centered between a rainforest that hearkens back to the ancient days of Gondwana and the Great Barrier Reef. This was the place I had hoped to make my home for the next several months, but without a job I wasn’t so sure what to hope for. The drive was the most beautiful hour of the 2,000 kilometer drive Michelle and I had just finished while moving a free campervan between Brisbane and Cairns, with a blue sea that stretched flat between the jungled sand and the sunstruck horizon where the reef waited unseen. 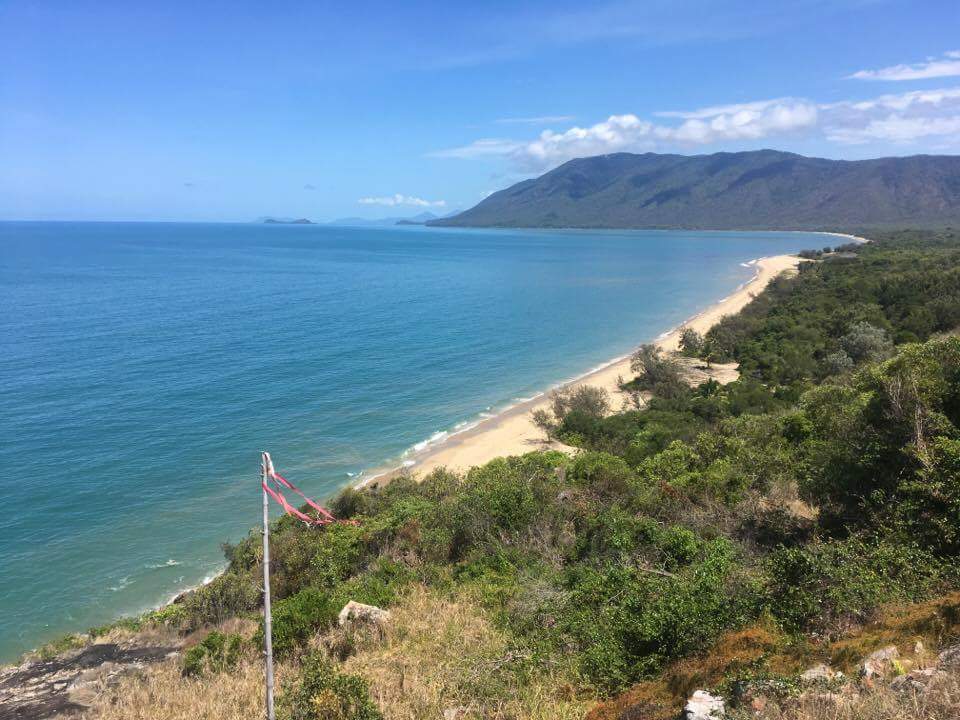 Port Douglas itself appeared as a tree-lined street that cut across a point between a marina shadowed between rainforest hills and a 4-mile beach that I glimpsed shadowed through the far trees. Within ten minutes I had settled into my room, in 30 minutes we were chatting with the receptionist on our way out to the beach where locals compared crocodile sightings, and an hour from the time we stepped into Port Douglas we had an arrangement to work for accomodation at a lovely backpackers with a pool, spaciousness to fill with words, and two large hammocks.
I have a hammock now. I have a keyboard for my kindle. I have all of the time that I choose not to fill. I have every component of the image of my mind of the girl with her lapop open to quite success. For the next several months, this is where I am. Here where five bats and three white-and-yellow cockatoos have flown above me in the space it has taken me to write these words, where lorikeets last night spun in a cloud between the sunset and the Veranda bar, where the crocodiles I consider it my duty to come to love lurk unseen in shaded streams. Where the reef that I cannot begin to imagine shifts in color below the horizon.

But does this mean I can write?
I am not sitting in the hammock. I sit across from it, in a wicker seat, on a second-floor balcony with a tree rising behind me like a throne and a cup of coffee on the table. I look at the hammock, with red and white stripes fading in the sun that slices across the fabric, and it is not only the sun that keeps me sitting upright. I cannot write in the hammock; not yet. I am not the writer in isolation, self-contained, with words that flow from themselves and the jungle as a mere tapestry to my back. I cannot write from the hammock while I am still living the story it will someday tell. There are lorikeets above, and their slicing speed screams the quiet loss inside myself I still seek to understand. The reef still shifts through its kaleidescopic identities, and I have yet to dwell in their midst. I have not yet moved past fear to love a crocodile for its own self. I still don’t like vegemite yet. I haven’t lived this world enough to understand how it weaves together in the same ocean and the same air as the glaciers I loved in Alaska. I am motion now, and not static, writing a thousand sparks of sunlight on the waves until the day my words come to understand the slower story of currents below.

But there better not be mountains outside.

One thought on “The Girl Beside the Hammock”