I would like to introduce you to a very important person in my life:

He rocks a bow tie, but still keeps it casual.

He’s quite the conversationalist.

He carries my stuff without being condescending.

He is guaranteed to be there for any adventure.

He is Wally, my scooter, and the true love of my Jeju life.

Now that summer has come to Jeju, much of my weekends are spent with my dear Wally. So I present: My Weekends with Wally.

The Sons and Daughter of Mild Confusion and Disorder

I can’t talk about Wally without mentioning our wilder days. And by “wilder days,” I mean two months past, when we roamed the roads of Jeju in our very own biker gang.

The Sons of Mild Disorder and Confusion was formed by three founding members with working motorbikes, an island-full of roads, and the desire to look really, really badass in pictures.

Once Wally emerged from his winter repairs, the group expanded to the Sons And Daughter, etc.

We went to whatever this monstrosity is…and took pictures.

And then we returned to the parking lot or gravel pit, where our bikes waited, and rode off once more into the sunset. (Well, rode off into the midday. Due to tinted visors.)

Wally and I miss you, oh brothers.

Each Saturday at 12:15, I meet my fellow mermaid student Julia downstairs to pack up the bike for haenyeo school.

On go my fins.

On go her fins.

On goes her backpack.

On goes my two-person blue kid’s tent, and my sleeping bag (sometimes).

On go the two of us.

And this Saturday…on went the snickerdoodle bars.

And then, as if he wasn’t already perfect, he even sticks around until everything has dried out.

Wally tried his best to keep me out of City Hall on Saturday night. He sat solid in the parking lot of haenyeo school, his simple presence arguing that I should go out drinking with my fellow mermaid students, despite the threat of rain, and come back for him in the morning.

But I didn’t listen. I waved goodbye to all the cool mermaid students as they drove off for makeoli, then balanced our gear atop dear Wally and drove Julia and myself back home. After which, naturally, I ended up catching a bus to city hall for barbecue, and then a band, and then the obvious necessity of belting “Oooooh, Sally, don’t go” into a noreabong night.

When I stepped outside of the last club, the sky was light. The birds were chaos.

I should have listened to Wally.

Temples with the Walls

Just after lunch on Sunday I was back astride Wally, a water bottle in my purse and a headache in my skull. The day was too beautiful. It felt a crime to waste it.

I followed the wrong highway up past the sex theme park and promptly got lost.

“Mysterious Road,” read the street signs. Why, wondered I. I pulled over to the side of the not-so-myserious road and read that this stretch of road created an optical illusion if you rolled with your car in reverse, making it look like you were rolling uphill.

Why not give it a try, I thought. I walked Wally into the middle of the road, and stood like that for the entirety of the second it took me to realize that a scooter can’t roll. It can only fall.

By now I found myself gloriously lost. I followed back roads, dipping through forests and hayfields splattered with pink azaleas, holding only the faintest hope of where those roads might lead.

They led to wild red berries. White honeysuckle, which only yesterday I had stopped on the side of the road to ask about, Julia still on back of my bike, as two ajummas gathered their plastic bags of honeysuckle.

“Juice,” they had said, and then shook our hands before I drove away. 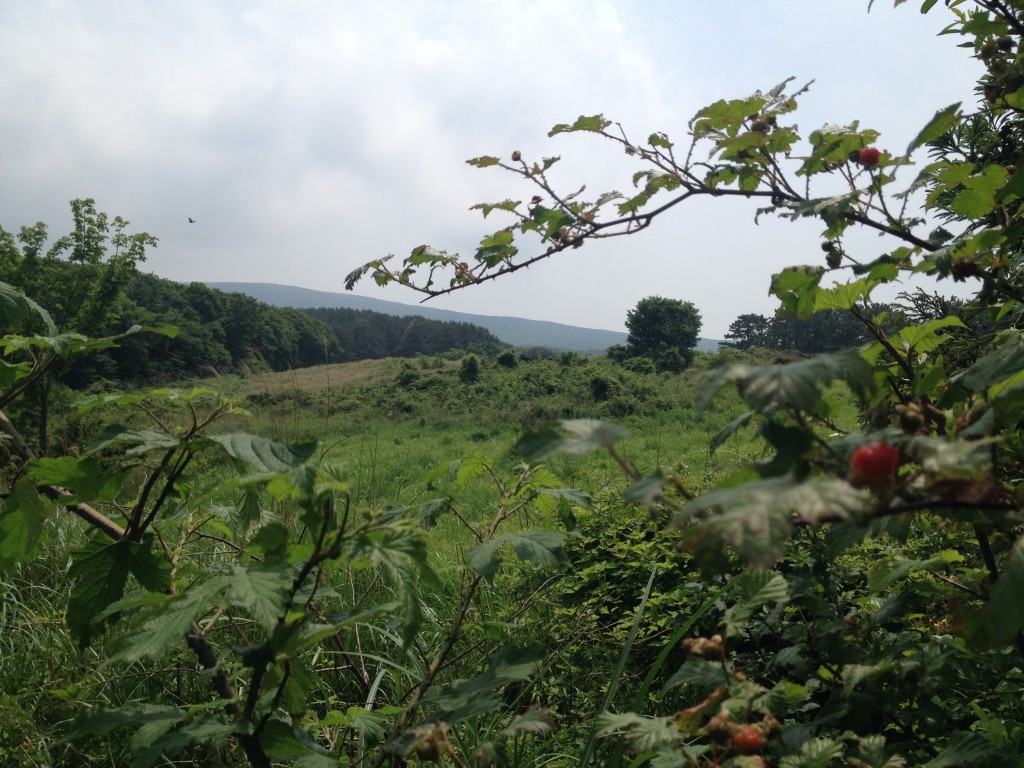 A surprise temple waited on the side of the road, and Wally and I stopped in to say hello.

Meanwhile, messages dripped through my phone speaking of sad, sad hangover days. I thought it kindest to not tell anyone where I was.

Finally, I managed to orient myself enough to find the right charming country road. By now the countryside had opened, from the brief pinch of city to wide, sloped green stitched through with the smoothly arching road.

There’s something so unexplainable about the simplicity of motion below an open sky. Wind on your face, in your hair: cliches that exist precisely because they are too true. When the wind curves around your cheekbones you know distance measured in molecules, in the steady rush of air that spells out life, and eyes, and open road.

I dipped over low hills and around roundabouts, finally ending at signs for the wetlands of the Gotjawal forest.

And the stunning Fairy Pitta, a permanent settler on my Jeju bucket list.

Alas, I saw neither. Though something of the approximate shape and size (and possible color) of the fairy pitta DID fly of this nest.

Instead I found a perfect rock beside the perfect wetlands, and watched the birds dip insects out of the green-padded water. All to the taste of the chocolate biscuits I had carried with me for this very moment.

By now the sunlight was starting to grown orange. I walked quickly back through the forest, my ears tearing off from the bird calls I couldn’t name. On the ground below me a butterfly shivered in death, the wind rocking his wings.

I took a shortcut along a road, and saw a mysterious black bird cut knife-like through the air, its body a long black skim so fast and thin that I almost second-guessed the sight.

I reached Wally just as the sky reached its gentlest. I drove straight down to Hamdeok beach, where I looked out across the water towards the pen of the two Indo-pacific bottlenose dolphins waiting to be released from years spent in a torturous tourist basement.

I went for a quick swim, my body sharing the same water as the dolphins. Water as clear as thought. The current tugged at my ankles as I made my way back to the rocks. Sunset dyed the water pink, the perfect antithesis to my tired sunrise.

And I climbed atop Wally, and we drove home, where I sat in the room of a Son of Mild Disorder and Confusion and watched the original Jurassic Park for the very first time.

You’re on your own. Somewhere above Ara-dong. May you get as beautifully lost as I.

Follow the directions in this article from the Jeju Weekly.

Yes. I am selling my beloved. Available the first week of August. Comes with a full tank of my own tears.