I started this post to the background noise of a washing machine as it cleansed our clothing from the dirt of the past week. The last four days of the LA River Trek come as a swirl of mountains and vistas and gentle creeks, threatening to pour away, and I need to capture these memories before they rinse away like the soil in our t-shirts.

But the trip. I learned, was the easy part. Back in the busyness of Long Beach, the difficulty is now in finding the gaps of time between 15-hour shifts and educational planning to write about what the mountains taught us.

With time on my mind, it becomes natural to talk about a place where past and present overlap: the Arroyo Seco, one of the tributaries of the Los Angeles River, and a place whose history is tied into the building of roads.

First, let’s take a moment to frame the Arroyo Seco within the larger story of water in the Los Angeles area. The Los Angeles River runs its course from Canoga Park down to the waterfront of Long Beach, but the watershed as a whole outpaces the distance of those 52 miles. A watershed is all of the land that funnels rainwater into a larger body of water, such as a lake or an ocean. The Los Angeles Watershed moves beyond the river to pull water from the Santa Susana Mountains, the floodplains of the Los Angeles neighborhoods and cities, and of course, the wrinkled crown of the San Gabriel Mountains.

When rain falls on this land, it gathers into small, forked rivulets which pour into streams, and then creeks, growing larger and larger until they finally ease into the full flow of the Los Angeles River and then pass out into the ocean. Two main tributaries come down from the San Gabriel Mountains to intersect with the Los Angeles River: Tujunga Wash and Arroyo Seco, and last week, Glenn and I explored them both.

Today the Arroyo Seco joins the Los Angeles River quietly, passing unnoticed beneath the shudder of traffic as the 110 freeway meets the 5 freeway. From there you can follow the tributary along the 110 to the Jet Propulsion Laboratory, or JPL, where the water widens with a dam into the spread of trees before folding back into the hills of the Angeles National Forest alongside the popular JPL hiking trail. At that point the creek largely falls off of the human map, easing into the quiet of the hills.

But in the early 1900s, this was where the trip began. From roughly 1880 until the devastating floods of 1938, the San Gabriels hosted crowds of hikers in what was known as the Great Hiking Era. Arroyo Seco formed one of the crowning jewels of the area in the form of Switzer-land, a hiking resort nestled in a chalky white canyon carved by the Arroyo.

Before highways carved the mountains, there was only one way of reaching Switzer Camp: by trail. In their book Trails of the Angeles, John W. Robinson and Doug Christiansen tell of how burro teams approaching the camp would lift a horn off of a waiting bush to blow one blast for each guest, arriving at camp to find hot meals waiting for each hiker. Guests could then spend days soaking in the natural beauty of the Arroyo Seco, all aided by tennis courts, a library, and one famously precarious chapel.

The camp ran until 1959, when highways lacing the hills made the concept of hiking up to Switzer sound unnecessarily arduous, and the resort faded back into the sound of the running creek.

Last week Glenn and I came to Switzer with cameras ready and notebook primed, ready to see the Arroyo Seco in its present. We started from the Switzer Picnic Area and walked along the wide, flat path beside the river. The scene was idyllic in a storybook sort of way: tall trees, filtered light, gentle creek running through sand. Everything around us was soft and grey, from the chalky canyon walls to the washed sand below the river. Even the trees shone pearly grey. The air shifted with the feeling of moonlight in midday. I stopped at each pool to look for salamanders, hoping for the stab of orange color held in their skin, but the water stayed still in silky translucence.

The path opened up into a trail camp, where we sat on a rock and peeled apart acorns to see what was inside. Two old stoves sat beside us. “Do you think these are older than 1959?” I asked Glenn, and he said he did.

Now the trail crossed the stream, and became suddenly steep. We followed a ledge carved from white stone as it worked its way along the criss-crossed hills below us. Below us we could just glimpse Switzer falls at work in the bottom of the canyon, and when the trail bent back down into the canyon it swallowed all noise but the sound of the creek.

This space was geometry, I thought. The sharp angles of river-carved stone. The “Vs” crossing the water above each pebble, lacing together, marking the creek with their scales. Through it all the creek meandered, gracefully whimsical between the white stone it had chiseled and the triangles inscribed on each small rapid.

The falls came as a scoop of stone laced with clear water, and Glenn positioned his tripod as I sat on a rock with my notebook open and wrote questions of physics into the poetry of quick prose. 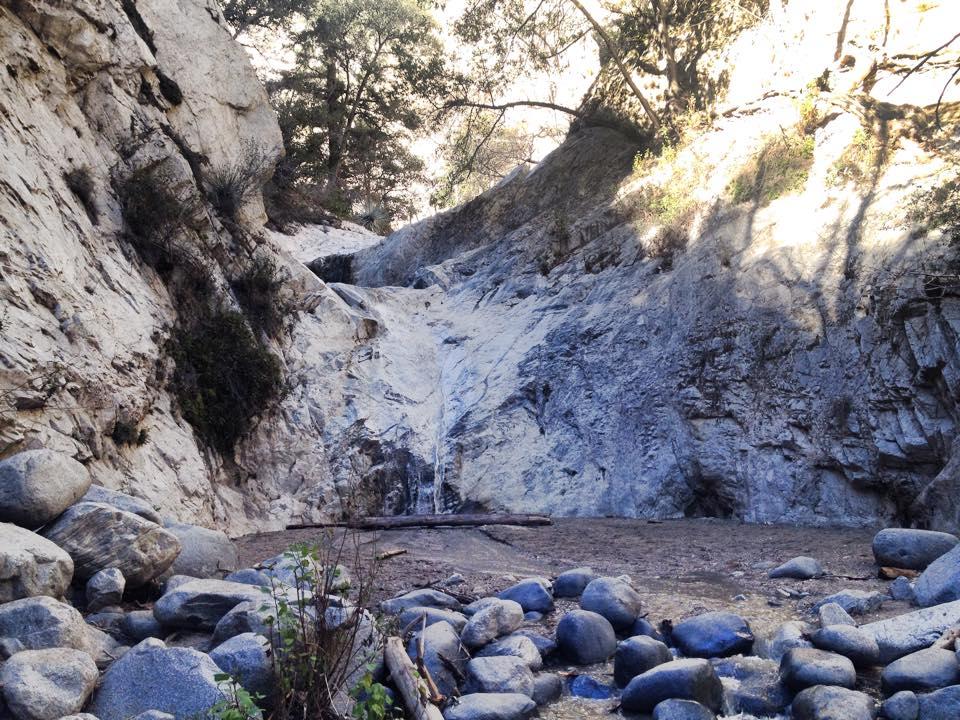 This space held itself, I thought, as we walked back with the fading light. I could imagine the ghosts of this canyon in the softness of the light that fell as smooth as clay, but they did not define this water. The guests of Switzer’s Camp had come just as we had, to see the light within the water of Arroyo Seco, but the point of the story was not our eyes, or theirs, but the light itself. Soft and malleable. As gentle as stone.

As we left the canyon we found an old car engine buried in the sand. Somehow it felt as natural as the boulders beside it. We paused anyways, reading the firing order, and I was struck by the human need for our own history. This canyon was many things: Nature, beauty, a source for the Los Angeles River beneath, but what we stared into was the reflection of our own species.

And then we walked away towards the highway, and for the moment the cool grey woods eclipsed even that.