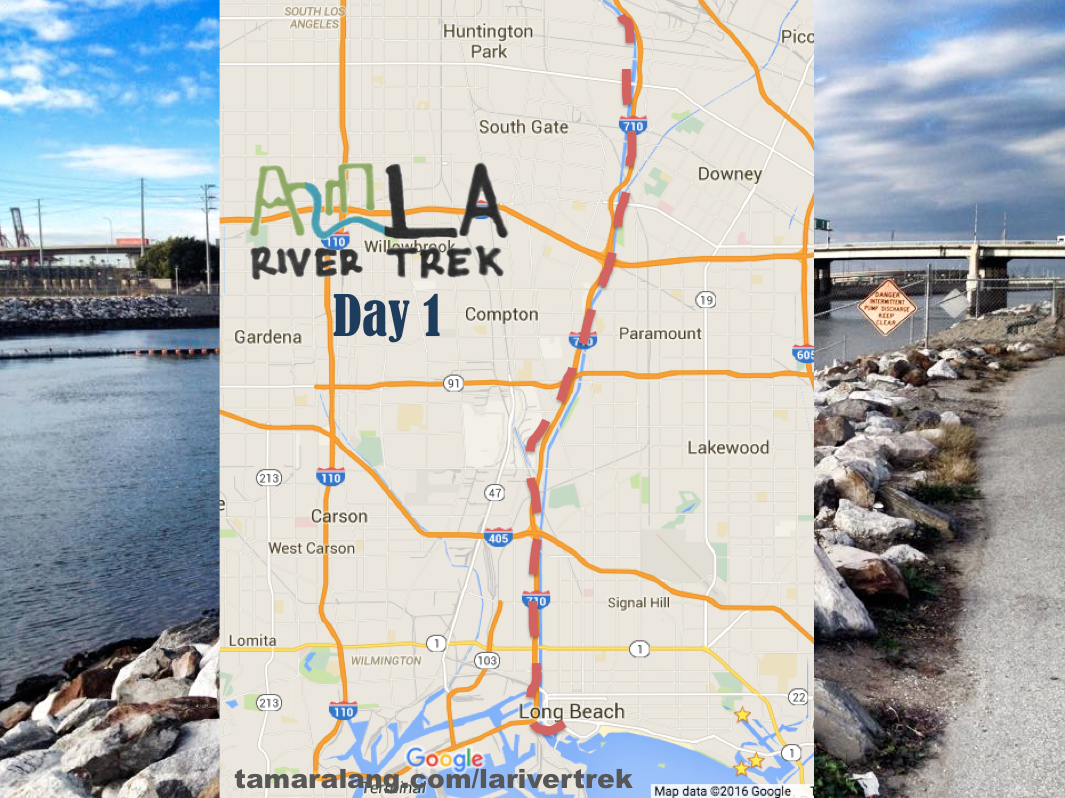 Yesterday morning, I left my front door in Long Beach and rode along the ocean with my friend, the photographer Glenn Lewis, to the start of the Los Angeles River. As we rode I tested the memory of this beach, and found it sitting solid in the creak of muscles that had run and swam every inch of this sand and water. This ocean was my home; it was safe.

We reached the end of the beach and rode past the Aquarium of the Pacific, where I had learned to love the science contained within each drop of ocean water, then paused to take a photo with the boats that had taught me the shape of a gray whale’s fluke. 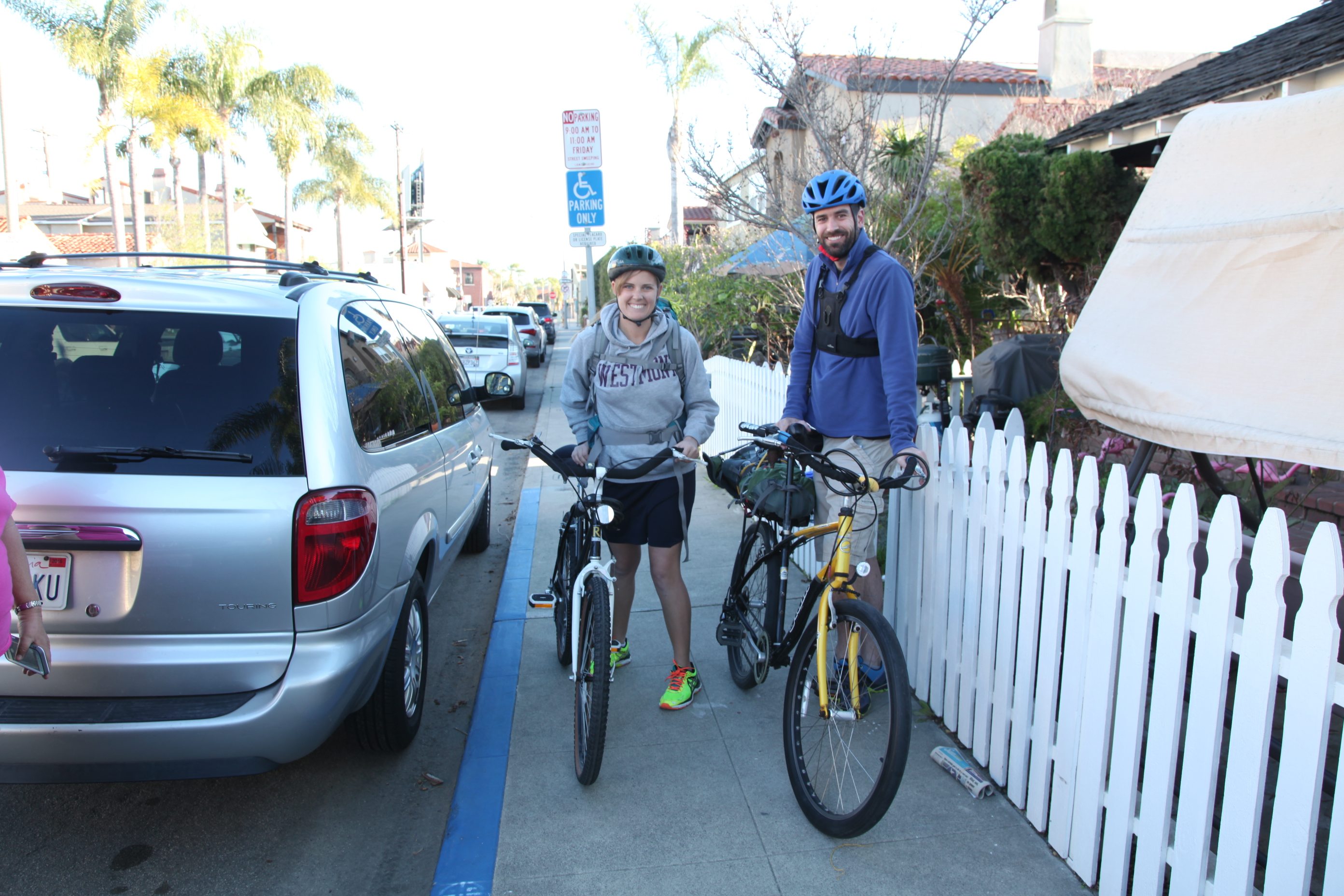 And then we reached the Los Angeles River.

“This is it?” Glenn asked, “This is the river?” He stopped to take a picture.

I could understand Glenn’s question, because the river here was not as expected. The Queen Mary sat heavy on the far side, the Catalina Express catamaran gliding through the wide blue water between us. Its wake formed the strongest current I could see. This was not river; this was ocean, moving through boundaries to fill the riverbed. It was an ocean that I knew.

Up ahead a bridge sliced across the cool blue water, its shadow like a guillotine. At night this bridge would light up into a show of neon greens, purples, blues, but only on the ocean end. On the other side of the bridge, beach culture ended with the line of dark water. This bridge was a division. On one side, the ocean gleamed with tourism. On the other, the river was left to gather its own light.

We rode through the shadow of the bridge to found life buzzing with paradox. Birds dug through the mud of the Golden Shores Ecological Preserve, while the cranes of the Port of Long Beach dipped down towards container ships coming in from around the globe. As we rode the water narrowed from a wide channel into a line of blue water that fit the word “river.” I could read the history of past floods printed into the long grass.

“Wait,” Glenn said once, stopping his bike. “I saw something in the water, and it wasn’t a bird.” I pulled up to the railing and watched as ripples materialized into a sleek brown head lined with whiskers that hovered for a moment above the water before disappearing into the river. The water smoothed out into a flat plane of blue.

“It’s a sea lion,” I said, surprised. “That means there must be fish.”

We watched the sea lion for a few minutes as he moved between the banks of long grass. Birds above and below shone in spots of white, and I wondered at the number of ducks and wading birds that appeared in their different forms along the banks.

The next bridge read “Willow,” and beneath it I saw something I hadn’t expected to find: a fisherman, alone in the river, casting his line between the flocks of white birds. I felt displaced. All of the components of a natural river were present: the woody island, the long grass, the birds and the fish and the fisherman. The only additions were the banks of concrete that rose to meet the bike path where we stood, and the sound of the 710 freeway.

This was the end of the river that looked like a river. As we left Willow Street behind the river evened out into its scale of concrete, the sounds of the city pressing in subtly between the banks.

It was the shift in sound, more than anything, that stopped me above the Dominguez Gap Wetlands. Where before there had been only the hollow echo of concrete, there now mixed in the undulations of bird calls between branches. We paused on the edge of the wetlands, deciding at last to go down.

Inside felt like a different space entirely. Warblers darted through brush. “There’s a turtle there,” Glenn said, pointing toward the reeds. Water stretched through the reeds, ending in the mountains still fresh beneath Sunday’s snow. On the ground below us, the hoof prints of horses curved the sand.

I peeled an orange. A plane from Long Beach Airport passed overhead, and the blue line ran past behind, all to the hum of the 710. Planes, trains, and automobiles, all rendered powerless beneath the sounds of the birds.

When we rode back to the river, the feeling of green grass still pulled me. We passed Compton Creek, its bottom lined with green, and decided to make our way towards the Rancho Dominquez Adobe House. The street was large, our first city street, and Glenn and I worked to avoid the passing cars.

We finally made it to the Rancho, grateful for the shade. I spoke with a docent Raul, who showed us some wooden pipes engineered by Muholland while leading us to the Museum Director Alison Bruesehoff.

“Sit down, or don’t?” Alison wondered, as we stood in her office, running through the mental question of whether or not to remove our backpacks. “I haven’t been backpacking in a while.”

I asked her about the Rancho’s connection to the Los Angeles River, and was not surprised to learn that it had dominated life on the rancho. The river, she reminded us, was once a vast floodplain with a constantly shifting route. This posed a problem when the property lines of the ranchos were determined by the river. “That’s why they began branding the cattle,” she explained (and I paraphrase), “Whenever the river altered course, your herd might go down by a hundred head of cattle.”

Bruesehoff pointed us towards the windmill in the front of the museum, which had once been used to draw water from the ground. “One of them is still in use,” she told us, describing the modernized well on the edge of their property.

We ate tuna sandwiches on a picnic bench, then glanced at the well before we passed Compton Creek on our way back towards the Los Angeles River.

When we reached the river, our mood had shifted back into the feel of adventure. Two kids tried to ride a skateboard down the steep river banks, braking with the soles of their feet. The concrete river below us stretched wide and blue. We fit easily into the pace of our bicycles. “It’s not a river,” I said. “It’s mirrored sky.”

A flock of sanderlings moved past as one entity, their white bellies flashing when they turned midair. Ahead, a flock of seagulls startled and rose in a two-part spiral until it became clear there was no threat, they separated out into their own self-sure directions.

They were flying between sky and sky, I thought. Blue above, reflected blue below, each studded with white feathered bodies. The great inversion latent in light. Between these fields of blue Glenn and I rode on our bikes, talking of flocking technology. The river moved on below us.

We rode above a stretch of bike path carpeted with bright graffiti. A sign said the path was closed, and we stood in the hot sun worrying over google maps until another biker rode up and simply pushed the gate open. Sheepishly, we followed, until the bike path dropped us again on the city streets of Vernon.

Ahead of us, the river slid through a channel and into the layered buildings of downtown Los Angeles. We tried to track it, riding through city streets where industry was the defining feature of the landscape. Semi trucks breathed down our necks. The patched asphalt and google maps led us past warehouses and taco stands, along train yards, and finally out onto the merciful space of the 7th Street Bridge. Below us, the river ran heavy with relief.

I paused to let this final image of the river settle into my mind. Los Angeles, seen behind the double curve of the historic 6th Street bridge, rose out of the warehouses with something approaching grace. On the other side, trains rested on their tracks. Between them both the river ran through the shadow of its own banks. I could feel history here, and paradox: This was the river that had created Los Angeles, and now it ran quietly through its own space. Below the bridge the water moved through its own story, not pausing, as much a part of the city as it was a part of the ocean, or the wetlands, or a part of the hills beyond. Water in motion. The idea felt fresh on my city-clad mind.

We rode to Pizzanista, bought two perfectly cold beers, and I sat down to write the river in words. Glenn disappeared to take a sunset photo of the 6th Street Bridge, and returned just in time for us to reluctantly get back on our bikes and ride through the lit streets to Union Station to meet Julio, our couchsurfing host for the night.

As we threw our bikes into the back of Julio’s truck I counted this day of the river as an end. We had biked all the way to Union Station in Los Angeles from Belmont Shore in Long Beach, a full 32 miles.

An hour later, we sat around a grill a mile from the river in Frogtown while Julio cooked for us, telling about his social work with the homeless people who lived in the river. We learned of jazz musicians and professors cast out of their families for being gay. We learned of the homeless encampments lined with shopping carts, of the past occupants of each bridge, of the man who lived on a river island in a hammock with his pet rooster. As Julio talked I could paint the river through his experience: a human space, rich with color, defined not only by hardship but by personality.

In the morning, Julio said, the mist rises off the river. His words worked past themselves, drifting past the river to describe a feeling instead of a place. He told us of walks along the river, of fishermen catching carp, of the way the water looked beneath the still light. He told us the river through himself.

And I could hear in his voice that this was home.