After almost 60 miles of cycling, Glenn and I have finally made it to the official start of the Los Angeles River! Today was our third day, in which we biked from Griffith Park to the junction of Bell Creek and Calabasas Creek in Canoga Park, and it took us through the Valley and out into the streets for a new perspective on the river. 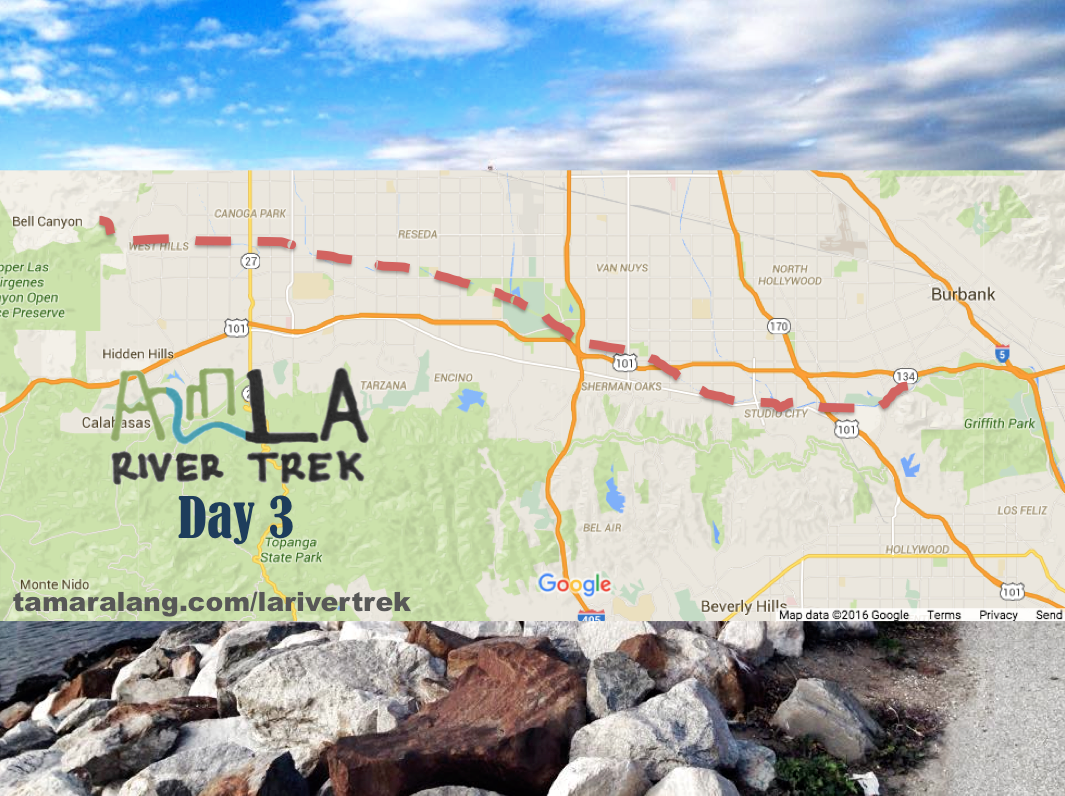 Our day began early on an air mattress in the home of Mike, our couchsurfing host, who is one of few people who can make the phrase “hashtag, so LA!” fit seamlessly into his normal flow of speech. We had spent the previous evening wandering through the streets of Koreatown with Mike and his two friends, deciding against ten identical bbq places before finally settling down for a grillful of delicious all-you-can-eat bulbolgi with low bowls of makeoli, or rice wine. When I awoke in the morning I was surprised to find that I wasn’t still full.

We sleepily said goodbye to Mike, who had been incredibly welcoming throughout our stay, and made our way through Silver Lake to the Los Angeles River. Once more, I was surprised to find how river-like the Glendale Narrows felt. We stopped to take pictures of birds, then looked up to find an unfamiliar species of duck with fluorescent green feathers relaxing on the bike lane. The morning felt cool, with the texture of river-rock, until the path dropped us off onto Riverside Drive and we made our way out into the Valley.

What came next were city streets and more city streets, with a bowling alley beside a church and cozy houses tucked away. The river moved past studio lots and around Forest Lawn, but we knew this only through their names on google maps. We were chained to the streets and the lack of bike lanes, which seemed like the perfect reason to indulge in McDonalds hash browns.

After breakfast we decided the roads were so far from the river that we were better off heading straight to the Sepulveda Basin, and so we rode parallel to the river until we found ourselves on the unexpected sanctuary of a residential bike lane. Families walked and rode along the bike path, soaking in the 85 degrees of sun as it filtered through blossoms. Young people rode past in singles as the even younger wafted along in thin groups. This was a deeply human space, as beautiful for its sense of community as for the trees above.

What would happen, I wondered, if you created this same space along the nearby river.

Eventually the road cracked open into the green of Sepulveda Basin. We walked up the hill to the start of the park, having given up on our lower gears at this point. I was feeling tired, especially as my pack dug into shoulders already rubbed red from our previous ride. We locked our bikes onto a park fence and walked out onto a path along the wetlands.

Reeds formed a screen between the water and us and beyond them the wetlands stretched low and blue beneath the geese that lowered down raucously onto the still water. Lizards rustled the leaves beside us. We reached an opening beside the water and watched as a pair of birds with square yellow backs flirted in the branches. 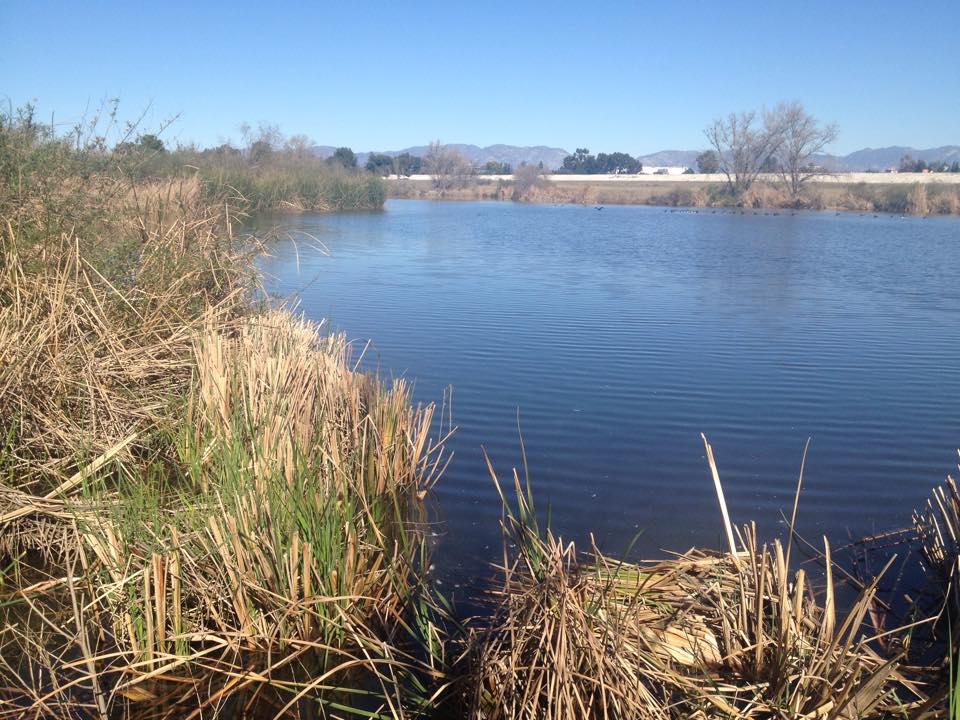 “It’s cool that countries, developed countries at least, have done a pretty good job of taking care of their local environment,” Glenn said. Standing in a park between city streets, I had to agree that it was pretty special that such a place existed.

We rode a bit further and then found something lovely – the river! It appeared to our left in a wide basin between the teeth of a flood control gate, then ducked under a bridge to reemerge on our right between banks of high trees. We stopped for a while to take some pictures, chatting meanwhile with the family that stood looking out over the river while their dog hid in the shade. I gave them a flyer and invited them to the Photography Show and Watershed Fair on February 27th, hoping to see them again. This river, I was realizing, was special, and it brought special people to itself.

As we turned in to bike along the river I was reminded of one of the major issues facing the river: trash. At every glance into the river I saw plastic bags hanging in the higher branches, visible traces of the last flood. What would have been a scenic shot of water, trees, and hills became a scene of rejection. Beside the river I could look past the trash, see into the interplay of wind in branches and golden light playing on the bottom of the river, but any pictures I showed would only emphasize the presence of trash. And while most of the trash would never make it to the ocean, some would, and each one of those pieces of plastic that drifted past the Queen Mary would then remain forever in our oceans.

As we passed Sepulveda Basin and moved back into the city streets Glenn and I talked about the idea of nature writing in LA. The word “nature” felt strange to me, I said, as though the status quo of the planet was simply an aside to human activity. There was a surprising community of nature writers within Los Angeles, I told him, delighting in the oddity of that sentence. Glenn was hesitant to call the area around us “nature.” It made sense, though, I thought, because there was nature hidden everywhere in Los Angeles, from the insects under bushes to the birds resting on the river between their long migrations. Each city street operated within the wider watershed, a system which had been in place since Grizzlies fished for steelhead below downtown Los Angeles. What, I thought, could be more natural that the world of land and water beneath the wheels of our bikes.

We rode along a well-groomed bike path with actual bike lockers and a wide bus lane beside until a street dropped us off onto the Canoga Park Greenway. This part of the river was nice, with native plants and shaped metal gates, but it was nearly empty. We speculated this might be owing to the closeness of the Super Bowl, which we were riding hard in order to see. The river below us ran in a steep concrete “V.” painted orange and brown with algae slicking the bottom of the channel.

As we rode a question that had been floating in the back of my head resurfaced: did I like the river. The answer came quick with instinct. I did not like the river- I loved it. It was gritty and awkward but interspersed with moments of surprising grace, and looking down at the water I felt a strange affection. Light gleamed off of bright algae, the concrete banks wide with distance below the far-off outline of the hills. This river was family. It sometimes annoyed me, but under these moments drifted a connection that I couldn’t deny. Between these banks ran my own story, the story of the water that shaped the soil I called home. “Mother Earth” was not a compliment to nature, I saw, but a complicated analogy written with a deep respect. I could not deny my relationship to this water, and I didn’t want to. I loved it, and that was enough.

I was so deep in conversation and traffic laws that I nearly missed the beginning space of the river. Two creeks with tall banks curved together, simply. At their merging the banks of the river formed a sharp arrow, pointing down through each of the river communities all the way to the space where our bikes had first touched the pavement, 52 miles away, where the river became the sea. 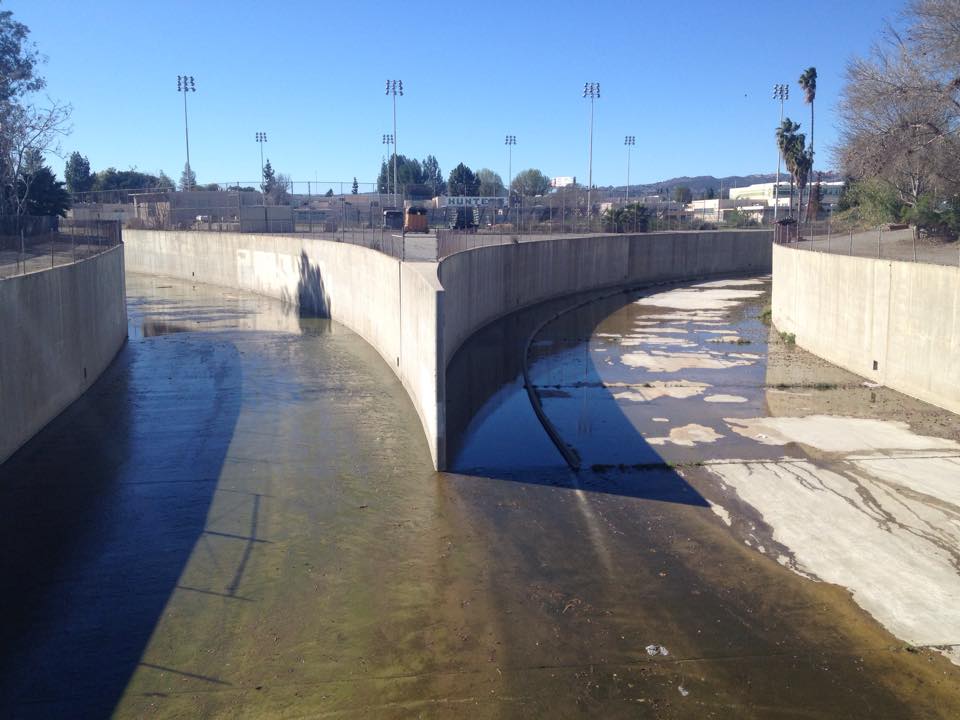 I am finishing this post in the locker room of a Canoga Park bowling alley as Glenn, being from Colorado,  sits fastened to the superbowl in the other room. Today we rode 27 miles. Tonight we will head out into the San Gabriel Mountains to set up camp for a few days of hiking throughout the tributaries of the Los Angeles Watershed. And we will learn how much more there is to love, whether or not I have the internet to share what we find.