It’s no wonder that I’ve never met a person who wouldn’t say they like the ocean. The water is mesmerizing, after all—the curl of a breaking wave, white foam and white shells on the sand, that blue line behind your shoulders in a beachy-hair picture. But what most of us call the ocean is no more than the line where water meets sky. This is not the ocean, any more than the glassy underside of water could be called sky. To meet the real ocean, you have to go beyond the limits of the world we know. To really see the ocean, you must leave the sky behind. 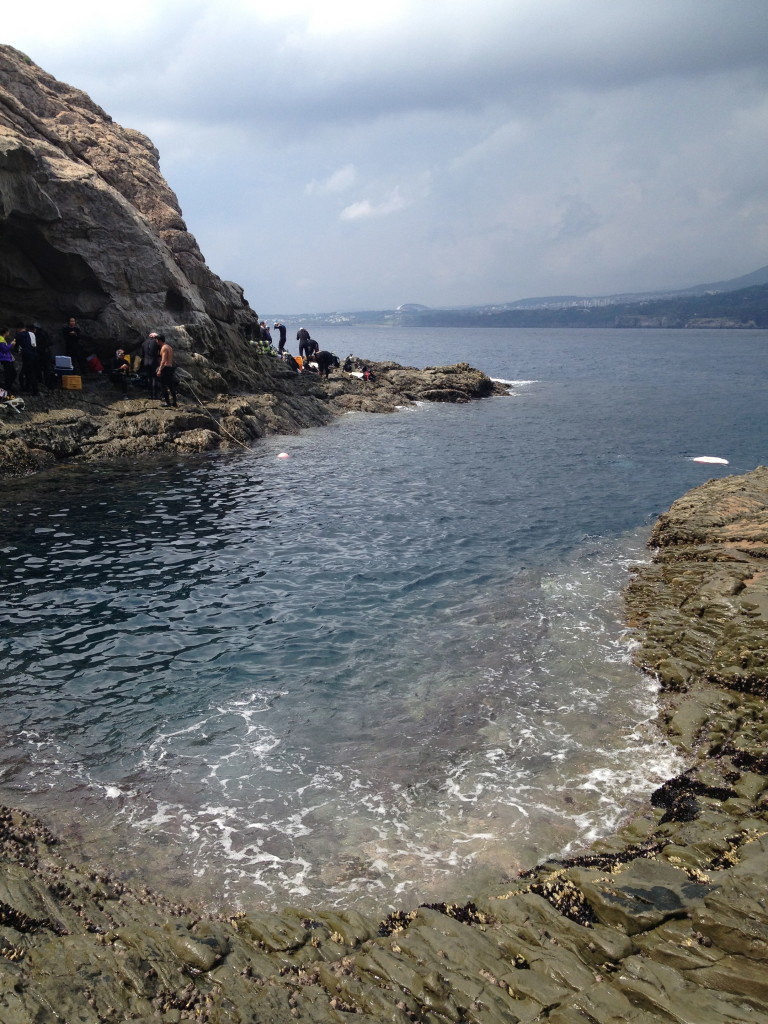 Thus it was that, this Saturday, I found myself on the 780 bus bound for Seogwipo for a day of scuba diving. It was very early for a Saturday, and I was only vaguely awake. Through the bus window I watched as the sunrise stained the clouds a brilliant pink.

We came into the Seogwipo bus terminal and took a taxi to the Seogwipo Submarine loading area, where we met our guides. Simon, the head guide, cut a fascinating figure for a Korean with his tattooed arms and his sleeveless shirt. The other instructors, Jason and Max, met us at the boat. In a few minutes our gear was loaded, and we settled into the obligatory life jackets for the quick boat ride to Mosquito Island, or Munsom.

I knew that Mosquito Island was close to the harbor, but I didn’t expect how close. In fact it was no more than several hundred yards off of the sea wall that extended from Saesom. I toyed with the idea of swimming out here in the future, but bookmarked the notion when I thought of the heavy boat traffic in the area.

At first glance, the island seemed inaccessible. From its apex the island broke into a steep slope, each side terminating in a cliff that sank straight into the water. A smaller pinnacle of stone stood off to one side—little Mosquito Island. As we neared the western side of the island, I noticed a small, rocky cove. The boat pushed up against the wall of this cove, and we jumped off the boat to unload our gear and ourselves.

The cove was empty save for us. We consolidated our gear and our backpacks into one corner of the cove, then prepared to dive. Of the four of us, none were very experienced divers. Jason wisely helped make sure we had our gear in order, and then we donned our wetsuits and gear and stepped off the rock wall and into the water.

It didn’t take long to see how the shape of the island made this the ideal diving spot. Just as the cliffs dropped straight down into the water, the wall continued to plunge down below us. In the cove the bottom was relatively shallow, making it the perfect spot for a future safety stop.

I instantly noticed the difference between the water here and the water where I had previously snorkeled at the base of Saesom. To begin with, the visibility was stunning—at least 15 meters. The marine life instantly began to evince itself. At the bottom of the cove we saw two lionfish resting on the sand, their delicate spines quivering with the movement of the water around them. Later, Simon told us he found a frogfish—my favorite fish in existence—resting on the wall.

From the cove, we moved left as we began to descend the rock wall. Nearest the surface the wall was sparsely covered with a low-growth kelp, amid which some fish swam. I noticed a few fish with ribbon-like dorsal fins that reminded me of the kelpfish I had known back in California. Algae and sponges added some spots of color, and urchins and half-glimpsed fins took refuge in the crevices.

It wasn’t until we continued our descent, though, that I really sensed the originality of these waters. The thrill of diving in Jeju does not come from the fish, or the substrate, or the algae—it comes from the soft corals. It was like swimming above a forest in miniature, whimsically sculpted in the softest shades of pink, purple, or orange. Yet there was no wind, no pollen, no falling leaves. There was only the airless hover of bodies suspended in the water, and the constant sound of my own breath.

The impression was unearthly. Imagine a wall plunging from shifting sunlight down into a hazy blue below, and then cover that wall completely with branched color. Then comes the thin line of blue water pillowing the corals, and above that schools of fish silhouetted in the clear water. Below the schooling fish the solitary wanderers swim – triggerfish, wrasse, black-and-yellow striped fish, pink fish with long, pearly trains. And in the crevices wait catfish with faces like swell sharks, half-glimpsed fins, frogfish, and even elusive stonefish. It was a kaleidoscope of shapes and colors, shifting ever so slightly with the surge, in which every spot of life was wholly at home and through which I moved slowly, awkward beneath my scuba gear, the body from another world come to learn beneath the shadows of polyps and the swirl of fins.

We resurfaced in the cove after 40 minutes, then set about killing surface time before our next dive. It turns out that this cove was the perfect place to do so. The area was formed from unbroken rock that moved from the watery bottom of the cove to the highest point of the cliffs. Below, the rock was full of crevices; above, it had eroded into small round caves that made for perfect climbing. We picked our way up the rocks to get some good pictures and an even better view of the water below.

After some time above water we went down for our second dive. This time, we went a little bit deeper in the same direction. Of our three dives, this one was my favorite— we stayed at just the right depth to see a good number of corals while still glimpsing a hint of their color. The effect, once more, was magical.

After our second dive we went up to have lunch. Simon had ordered lunches to go, and I heartily enjoyed the Korean that surpassed the sandwiches and apples I would have expected from a Western packed lunch. By this time, the cove had grown crowded with divers, and we could hardly walk fifteen feet without having to dodge another group. I was grateful for Simon’s wisdom in bringing us here early.

After finishing our lunch, we went down for our third and final dive of the day. This time, we explored the area to the right of the cove. The final dive was the best of the day in the number and diversity of soft corals that we saw. At 27 meters, this dive was also our deepest. At this depth red light could not penetrate, and so the corals faded into soft shades of white and blue. Everything looked foreign, even my companions. I was reminded of how utterly alien the ocean can be, even here where the sunlight still shifted above us. For the first time that day I felt isolated, out of place. The feeling was thrillingly claustrophobic. I was reminded that diving is much more than just underwater tourism. Instead, it’s one of our only opportunities to glimpse something entirely other than ourselves.

We concluded our dive and returned to the thin ocean where purples and oranges splashed the rock walls and where water slivered against the sun. Then we packed our gear and donned our life jackets and moved across the water to the waiting harbor. I said goodbye to Simon, Jason, and Max, who had all done a truly great job making our dive excellent. We took the 780 home. As I approached my apartment the sun was just beginning to set, staining the clouds a pale orange, a casual reflection of the world that I had seen beyond the reach of sky.

2 thoughts on “Jeju in Color: Scuba Diving at Munsom”