On Thursday, I was destroyed by a ballet.

Michelle and I stood in the dresses we’d dug out of our backpacks, watching the well-dressed patrons of the Vienna State Opera house from the balcony vantage point allowed by our 3-Euro standing tickets. We had already taken pictures, wandered through the chandelier-lit drawing rooms, and mentioned several times how posh we felt. Now we stood as the lights dimmed and the orchestra gathered below. There were to be three performances, choreographed to the music of three different composers. The first story to be told by music: That of Bluebeard and his wife. 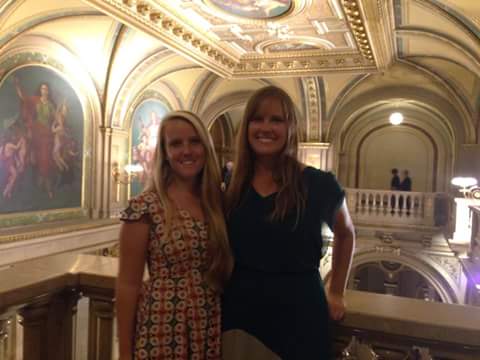 (My hazy idea of the story of Bluebeard, as told to Michelle earlier that day over strudel in a Googled Viennese coffee house: Bluebeard was a man-possibly a pirate, more likely with a blue beard- who told his new wife she could go anywhere in his mansion except for one room, which she naturally entered. There, she found the corpses of all his previous wives who has made the same mistake. Michelle had frowned. “I would definitely have gone in that room.” I had agreed.)

Now the curtain lifted to show a stage dominated by angled wall panels and looming doors, framing a table where Bluebeard sat in dark blue across from his wife, dressed in yellow. He danced to himself, a strange dance full of angles, and she danced out her own unwatched eccentricities before they came together in a choreographed coupling as charged with sex as it was lacking in connection.

He danced his way through many different women, each duet painfully earnest and empty, until finally meeting the woman who had hovered in the corners of the stage, odd and birdlike and dressed all in black. She danced, oddly, and he joined in with a first show of genuine feeling. 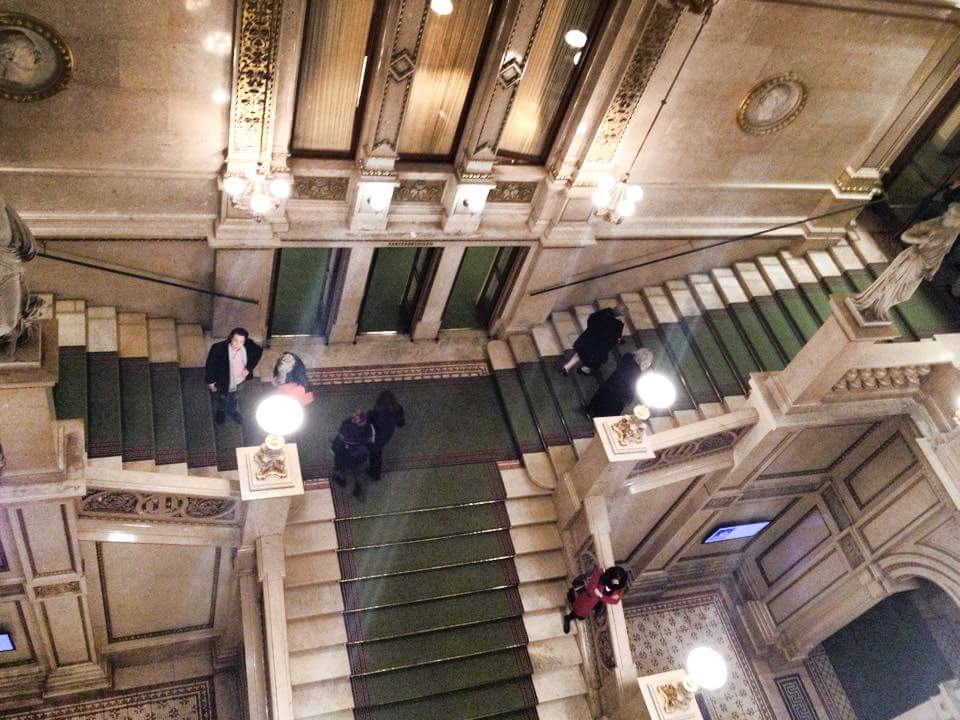 Throughout this the wife in yellow waited on the side of the stage, entering each dance with Bluebeard as though the word “trying” existed in subtitles in the blank space above her head.

But then she walked through the forbidden door, and my heart broke a little.

What she found inside was not the bodies of Bluebeard’s former loves, but their repetition, their formula, the stark knowledge that all that she was externally was the same set of movements and motions as every other dancing body. Passion was a process with well-rehearsed steps, the love into which she has tried to dance herself was the same that had always been danced before. Choreography in unison, cruel and faceless, and though she tried to dance herself into some unique mix of arms-back-legs-feet her attempts were beat down by the terrifying unison of what was meant to be unique.

And dancing through it all, the odd birdlike motions of the woman they all worshipped, who I saw now was not a woman but a concept as close to the dancers’ hearts as to my own: the lie of individuality, framed in walls and doorways to deliver the harsh truth that they were not special. 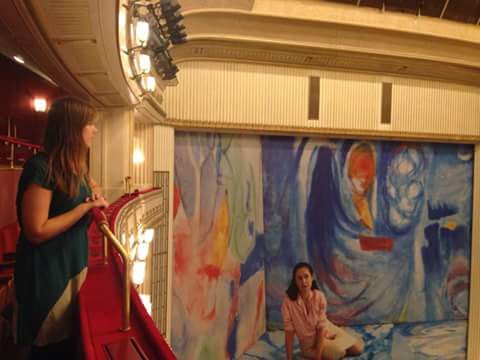 I’ve heard that human minds are designed to find faces in random patterns. I suspect that tbe face we find most often is our own.

Traveling is hard sometimes. There are moments of startling uniqueness – the architecture of Poland,  the Easter traditions of Slovakia, any mountaintop – but it’s easy to get absorbed by the sameness. Our species favors formulas, it would seem. And then we get stuck on the backpacker track, lured by cheap hostels and beautiful cities, and settle into the sameness of hostel conversations and coffee-breakfast-lunch. Our conversations fall into a well-worn track: where are you from, where have you been, where will you go, what did you study, and so on, until days can go by before an original sentence occurs. And I begin to wonder if original can even exist, or if it has ever existed.

Perhaps the problem lies with the single unifying factor in every conversation: myself. I know that the other sides of these conversations are full of their own special beauty, but the tragedy lies in my ignorance of how to access that hidden beauty. And that is the loneliest place to be: surrounded by the thing for which you starve.

Saturday night was Halloween. I painted my face like a sea turtle and sewed a cape-like shell from a Slovak thrift-store shirt (“Not-a-Mutant Normal Turtle,” was the tag line), and Michelle wore a pink dress and braided her hair like Rapunzel, and we went off on our first pub crawl of the trip. There was beer, Budapest bars, and a final club with an indoor tree, but when I woke up this morning the memory of the night felt so empty. We were dancing in unison, playing at being unique, doing the things one does at clubs. But all I could do was miss how it was when going out was a way to celebrate the people that I loved, to have joy instead of fun, to dance poorly instead of layering choreographed sentences. And it scares me that this might just be life. 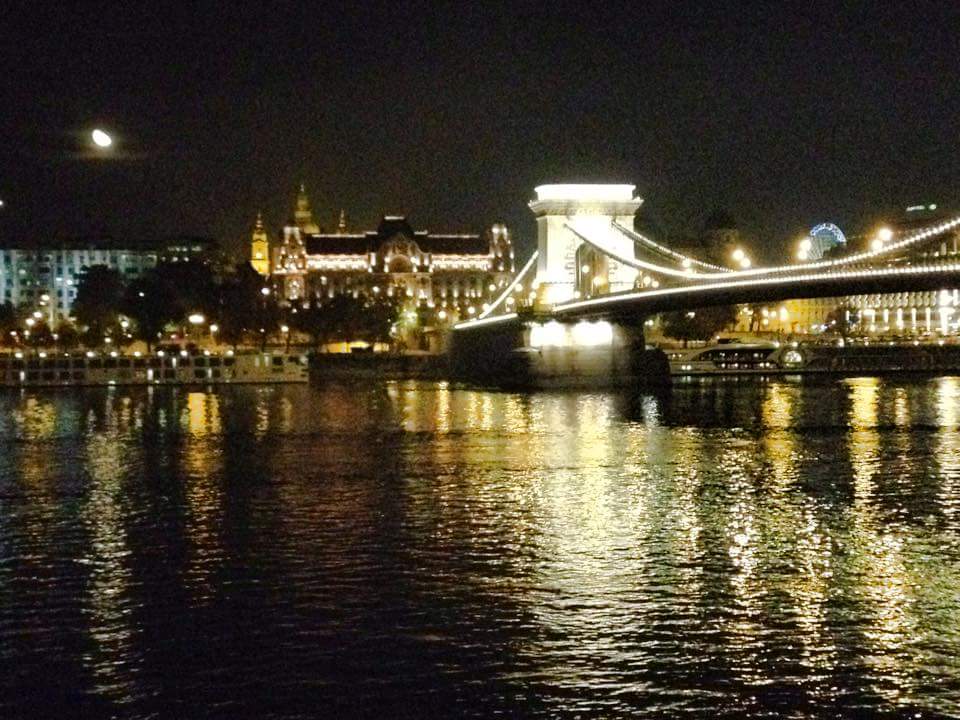 The woman in the yellow dress fought. She was different, her body read: she was original, strange, desperately bizarre. She was alone. She was herself.

And then, for just one moment, she was not alone. And she was still herself.

The curtain closed, and we clapped our way back into our own separate lives. But I caught at an idea, which just formed itself into a thought as I walked through the streets of Budapest yesterday afternoon while Michelle slept off her hangover: Art is our weapon. Art can cut through the formulas to the mind underneath, to free the dancer in yellow. I have to believe that she exists, somewhere, beneath all of our cultured conversations and Saturday nights. She exists, and she dances.

And I am so excited to someday see her dancing in people again.

2 thoughts on “Vienna, Budapest, and the Dancer in Yellow”