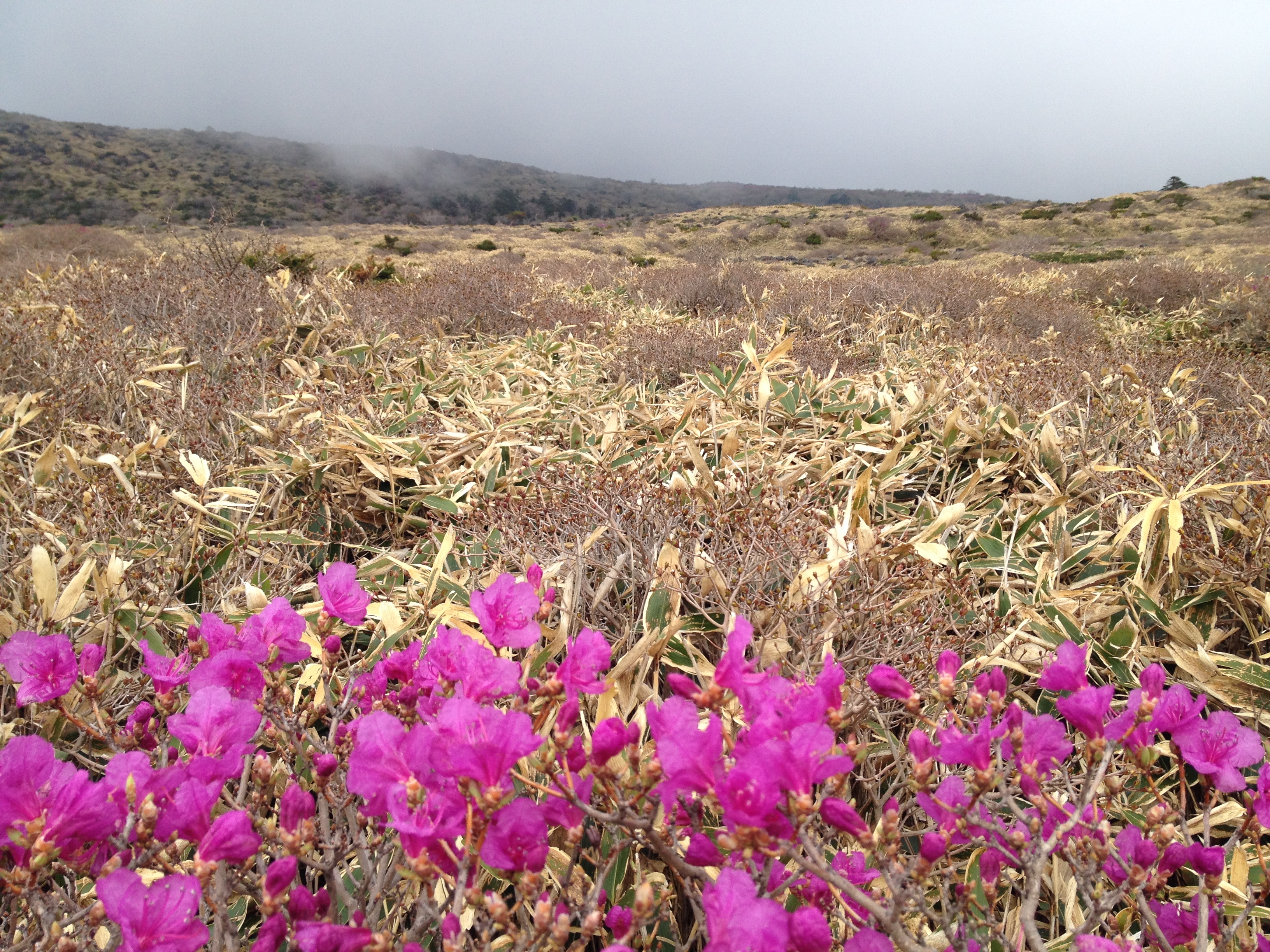 Once upon a time, there was the ocean.

That ocean boiled out a volcano, and that volcano slurped out an island. People came, left footprints on the shore, and trapped the island in names: Jeju Island. Halla Mountain.

Jeju Island and Halla Mountain are one and the same.

This week brought a four-day weekend and decent weather, so it seemed like the perfect time to further explore the residue of that volcanic eruption. With that thought in mind, I met up with my friends and took a bus to the Eorimok trailhead.

We started up the trail in glorious spirits. The sun was out. The birds were singing. The hiking stick Tim had found fit perfectly in my hand, and even the chattering groups of middle-aged women in their full hiking regalia couldn’t dissuade us from the close-pressed feeling of Being in Nature.

But we gained the treeline, and lost the sun. Grey mist eased into the hollows like a living thing. For the third time I stood on Halla, working hard to imagine the ocean landscape somewhere below the mist, but unable to see past the line of shrubs at my feet.

The trail that had shrunk four feet lower since my last snow hike stretched across the desolate side of the mountain. For just a moment, the trail held nobody but us.

“Shhhhh,” I said, stopping to listen.

Raindrops shattered against the tattered leaves of the underbrush, filling the mist with an elusive sound that wasn’t quite wind and wasn’t quite water but was something in between. It was the heard velocity of water drops, obstructed by an entire mountain’s worth of broad, identical leaves.

We kept walking, up toward the rest area where hiking groups sat on wooden bleachers around their pots of ramen, then beyond into the blissful silence of the Donnaeko trail. The fog cleared just enough to allow us a glimpse of the jagged rocks on our right that tore at the belly of the mist, then folded noiselessly back into the clouds.

We walked through a valley that felt like it were drunk. The boardwalk path veered to one side. The mist easing through the trees made the whole hillside reel.

“I’d like to do that thing in India where you stay silent for ten days,” Tim suggested.

I toyed with the idea, but had to admit that that amount of silence scared me. It might show me too much of myself.

As we walked, I kept an eye out for the azaleas that were rumored to line the slopes of Halla mountain at this time of year. One and only one flower appeared below a rock. I tried unsuccessfully to get a picture of the lonely spot of color.

But as we continued down the hill, more and more azaleas appeared along the hillsides, dyeing the mountain pink. There was something so lonely about these flowers, held above the ground on their empty shrubs. They looked too perfect for this mountain. Isolated by their own precision. Beneath them the tattered undergrowth eased along the mountain’s tawny slopes.

We sat down in the middle of the empty, noiseless path. Undergrowth rose to my ears. The bared branches of budding azaleas formed jail bars against the pale sky.

Sitting back into the thick air, I let the silence conquer my thoughts. Wind whispered through the leaves. The sky sat dumb above us. Even the fringe of my hair rustled in silence.

As I sat I felt something else ease out of the silence: peace. A full, damp feeling, like how the soil might smell. I didn’t need to explain my thoughts, or my wishes. Existence simply settled down, without words and without barriers, claiming only the basic truth of wind, and leaves, and pulsing life.

After a while we stood up, slowly, into the vast spread of sky. And we walked down the mountain, talking of tandoori chicken.

One thought on “The Walk of Silence: Halla Mountain under the Azaleas”