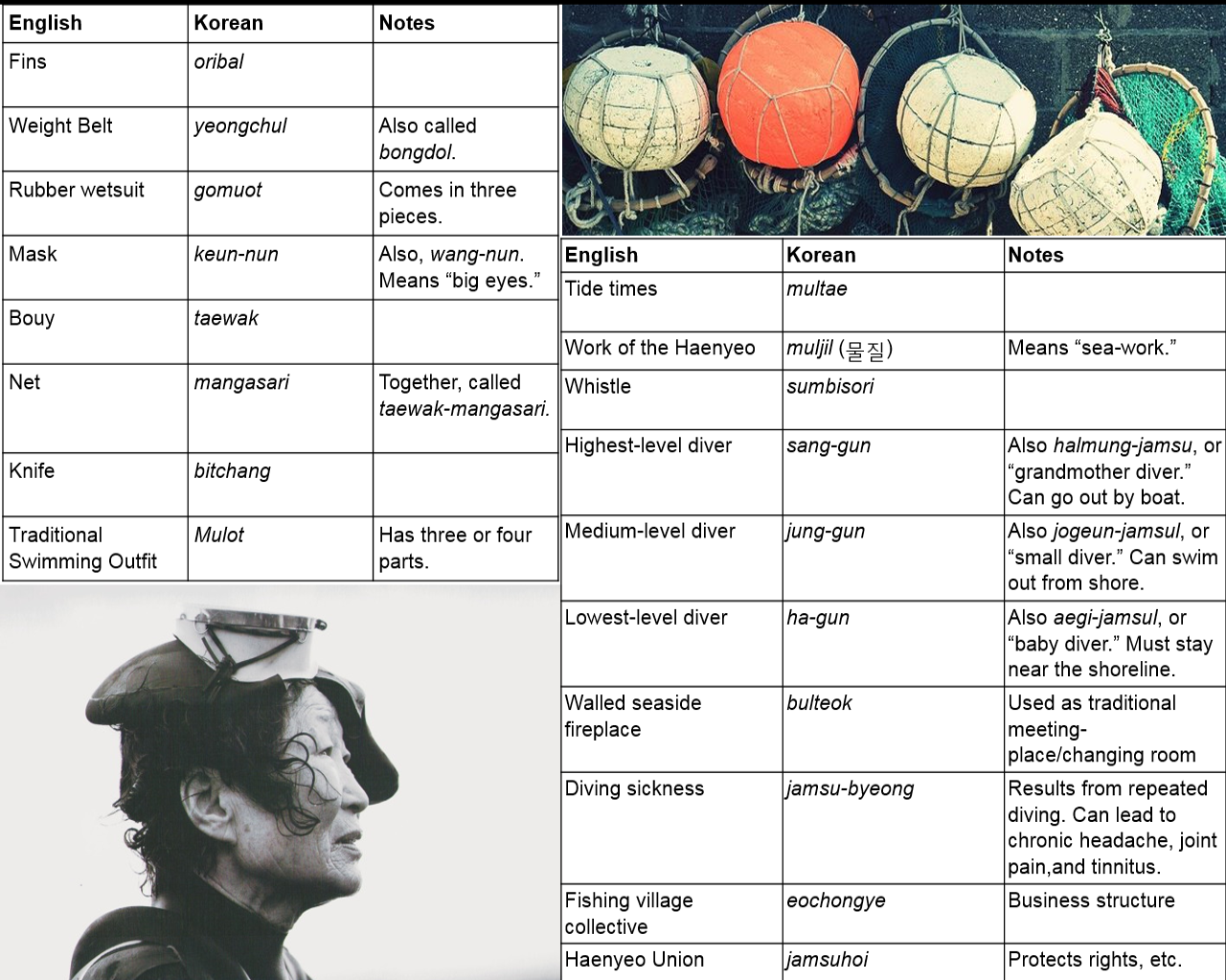 On Jeju Island, South Korea, this word refers to the work of the haenyeo, the elderly diving women who live as the real-life mermaids of Jeju’s volcanic coast.

Or so muljil means on Jeju, at least. Dropping the phrase 물질 (muljil) into google translate, I get the word “substance.”

The same phrase in google images brings up a picture of an atom in motion.

But when I add the word “Jeju” to both of those search bars, my screen shifts into a patchwork of blank blue underwater space.

Muljil is work, motion, and substance. It is the substance of a sea conch carried up in pace with rising bubbles. It is the motion of energy in waves, seen as a ceiling of shifting light. It is the work of hauling a heavy taewak up from the ocean that, on most days, is less a vision of beauty than it is a cold assumption of life.

For the past four Saturdays I have had the chance to learn about these women through the Hansupul Haenyeo School, a 17-week course that will leave us certified to work as haenyeo, should we so desire. The classes are all in Korean, and my three fellow foreigners and I have sometimes struggled to follow. (You can read about why I’ve chosen to take that class here.)

For someone who makes a living teaching English as a second language, and who probably won’t live in an English-speaking country for at least another couple years, I am woefully terrible at learning languages.

Instead, in haenyeo school, I’ve had to learn substance. Without knowing what a sea urchin is called, I’ve learned that it’s best to use a rod to pull them out of crevices, and that one haenyeo in particular likes to give the ones she catches to my friend Alex. I’ve learned that it made me feel like a child when that same haenyeo cracked an urchin open mid-swim and invited me to taste its yellow interior off of her gloved finger.

“It tastes exactly how you’d expect the sea to taste,” Alex said, thinking as she chewed.

I learned all of this instead of the word seonggae.

Learning Korean has always been a bit like cleaning out my bathroom: I know I need to do it in order to be a responsible and functional adult, but I can also do it tomorrow. (Guess what part of my apartment is currently weighing on my conscience).
But now, for the first time, I find that I really want to learn Korean. And so it happened that the very first word that I intentionally looked up, in the language of the country where I’ve lived for the last year and a half, was “sea hare.”

Thus began my Tuesday quest of creating the mermaid dictionary: a list of, not only the words of the haenyeo, but their substance.

A woman stood in the front of the bus, giving us a history lesson in Korean. I only recognized the words for two Jeju beaches and two Korean alcohols, then wondered what that situation said about my life.

She flipped the mic upside-down to switch it to singing mode. I heard her voice shift into the cavernous elegance of a noreabong (singing room) sound system. Then, she began to sing, reading the lyrics off of her pink smartphone.

The song came deep and wide and mournful, rocking with the motion of a bubble trapped on a wave. It carried the sounds of black rocks and white foam, and the chill of staying too long in the sea. I could picture this song pacing the rocks of Jeju alongside any era from now into the deep past.

Everyone on the bus began to clap, slowly. The chanting song and the sturdy claps mingled within the electric echo of the noreabong mic.

We reached the museum. Somebody gave me another kimbap.

Inside the museum I examined the details of the straw-thatched model house. A woman in my group tapped my shoulder. “Me baby, I live,” she said, pointing to the house’s stone walls. “Nineteen sixties-seventies, Jeju people live.”

“Many Jeju people?” I asked. I looked in at the simple stone walls and felt the strange presence of history.

We passed a display of jars for carrying water. She helped me understand that her house had used carried water until she was ten years old.

“Kitchen,” she said. Her hand pointed toward the simple stone room. “My kitchen.”

“The…governor’s record of 1702-3 identifies Governor Yi Hyeong-sang’s efforts to have a new diving costume designed for female divers, as at that time they were diving in regular underclothes or bare-breasted with a simple loincloth.” So says Anne Hilty in  Jeju Haenyeo: Stewards of the Sea, a book I happened to come across during my Tuesday dictionary compilation.

Two things I take from that paragraph: these women were diving even before Samuel Johnson sat in England compiling his Dictionary of the English Language. And they were badass about doing it.

In the haenyeo museum, I looked with special interest at the historic diving suits of the haenyeo, made of three cotton pieces collectively called the mulot.

Suddenly it makes sense why the bulteok, or the traditional meeting place/changing room of the haenyeo, centered around an open fireplace.

The 1970s saw the introduction of the gomuot, or rubber wetsuit, which consists of three separate pieces that are usually colored black and orange. These are the same wetsuits worn by today’s haenyeo, and they allow the haenyeo to dive for a far longer time. Anne Hilty suggests that their provision by the government in the 1970s might have had something to do with cleaning up the region for tourism purposes, as some tourists might have been put off by the intimidatingly badass women hanging out scantily clothed along the island’s coastlines.

Along with the gomuot comes an oval-shaped dive mask (keun-nun) that matches the one my dad kept from the 1970s. Weight belts (yeongchul) are just fishing weights or dive weights wrapped around the body on a thin black cord.

As mentioned previously, I am a total nerd about marine science. So, having the chance to learn about ocean animals from a different perspective has been quite delightful.

My students are currently studying a lesson that teaches them to ask, in English, about how to say words in other languages. As a result, Tuesday’s dictionary making quickly became the task of my students.

And this was the result. I present to you: the dinner-table dictionary.

This brings us to the most important part of the haenyeo dictionary: the orange buoy (taewak) and the green net (mangasari). The mangasari holds the catch, and the taewak holds it all up.

My mangasari has been consistently empty the past few weeks, as I’ve been too distracted freaking out about how cool all these animals are to bother with actually catching them. It’s an interesting line to cross between diving to admire, and diving to take. Even after having committed to this course, I’m still not sure how I feel about crossing that line.

It’s good to practice taking from the sea. If I eat octopus in restaurants, then I have a moral obligation to come to terms with where that (vastly intelligent) animal comes from, and to be aware of how my hunger will impact him and his world. Becoming involved directly in that process can only make me more respectful of the cost and benefit of my out-of-sea actions.

But, killing an octopus still seems sad. As it should.

The haenyeo last Saturday scraped urchins out of rocks with her bitchang as if they themselves were rocks. She dropped most in Alex’s mangasari with a cackle beautiful for all its generosity. Then she cracked open the urchin as carelessly if it were a nut, picked out the spiraling spines, and scooped out the yellow gonads with one gloved finger. She held her finger to my mouth.

I ate with one hand still resting on the rim of my own mangasari.

Have your own words about the haenyeo? Notice any problems in the translations of my sixth-grade translator slaves? Comment below!