The ending of a river such as the Los Angeles River is a complicated affair. I cannot sit on a boat and point towards fresh water on one side, saltwater on the other; the river slides through these categories in the shifting forms of wetland estuaries.

Today, years of development have meant that the wetlands nearest the Los Angeles River have all but disappeared. The matrix of historic wetlands that once lined the California coast are now largely contained in the Bolsa Chica Wetlands, just before the edge of Huntington Beach. This makes Bolsa Chica one of the best places to see wildlife, hosting migratory birds in winter and vast clouds of nesting terns in summer. 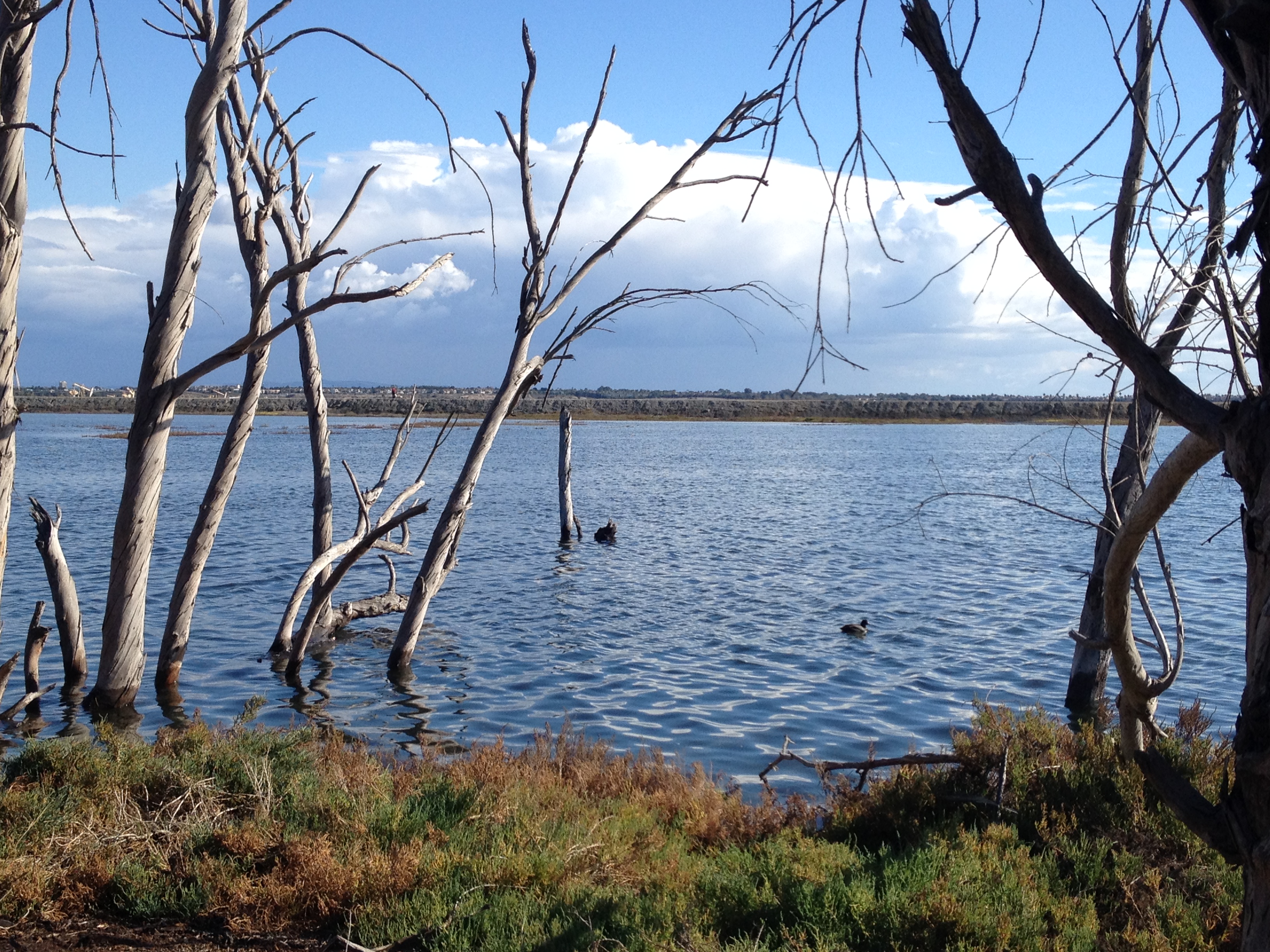 To walk through Bolsa Chica is to walk through the past as well as the present. Hills are topped with gun mounts from World War 2, the same type of gun mounts I found from the other side of that war while living on Jeju Island, South Korea. The dry dirt below Bolsa Chica has given up hundreds of artifacts resembling cogged wheels, and while these cogs can be traced to early Chumash ancestors who lived in the area from 6,000 to 3,500 BC, their purpose still remains a mystery. Even the birds hold the past in their calls. If you are ever feeling melancholic, I highly suggest a visit to Bolsa Chica in the morning; there is no sound so sympathetic as the calls of terns.

Looking for a model of what the wetlands of the Los Angeles River might once have looked like, I called Kelly O’Reilly from the Bolsa Chica Ecological Reserve to learn a bit more about the Bolsa Chica wetlands. Even through a cold, her enthusiasm for the wetlands was instantly clear.

Our conversation began as all conversations should: with sea turtles. I could hear the excitement in O Reilly’s voice as she described finding a sea turtle in the pocket marsh; this would have entailed the turtle swimming through an inlet into an enclosed wetland, all in order to feed upon the beds of restored eelgrass lining the bottom of the marsh.

This led me to wonder about the relationship between fresh and salt water in the wetlands. Despite being connected to fresh water, O’Reilly explained, wetlands near the ocean are largely marine. At Bolsa Chica, the salinity averages about 34-35 ppt – the same level of salinity that would be found in the ocean. After rains, however, a thin layer of fresh water might form at the top of the water column, descending with depth to the greatest salinity on the bottom.

The majority of species living in the Bolsa Chica wetlands, O’Reilly concluded, would be marine species. Ocean fish use the wetlands as nurseries, entering the inlets to lay their eggs, and once the young fish hatch they spend their young days sheltered in the matrix of wetland plants. At last count, she told me, 69 species of fish called the wetlands home.

Yet while the wetlands are largely marine, O’Reilly explained that it is in the flood control channels that you will see the greatest difference in salinity. The incoming tide sweeps ocean water into the channels, receding to leave behind fresh or brackish water. Mullet, very tolerant of salinity changes, will often reside in these transition areas. Above them, freshwater species such as carp will keep a wide berth of saltwater, which could send them into osmotic stress, while marine species such as halibut and kelp bass keep the same distance from the freshwater.

The most abundant species of fish in the Bolsa Chica wetlands, however, is not bothered. This is the topsmelt, a star of the estuaries, which can tolerate salinities ranging from fresh water to salinity nearly three times that of the ocean. Considered a marine species, the topsmelt are very at home in the Bolsa Chica Wetlands.

The greatest effect of the river is found in the mud. 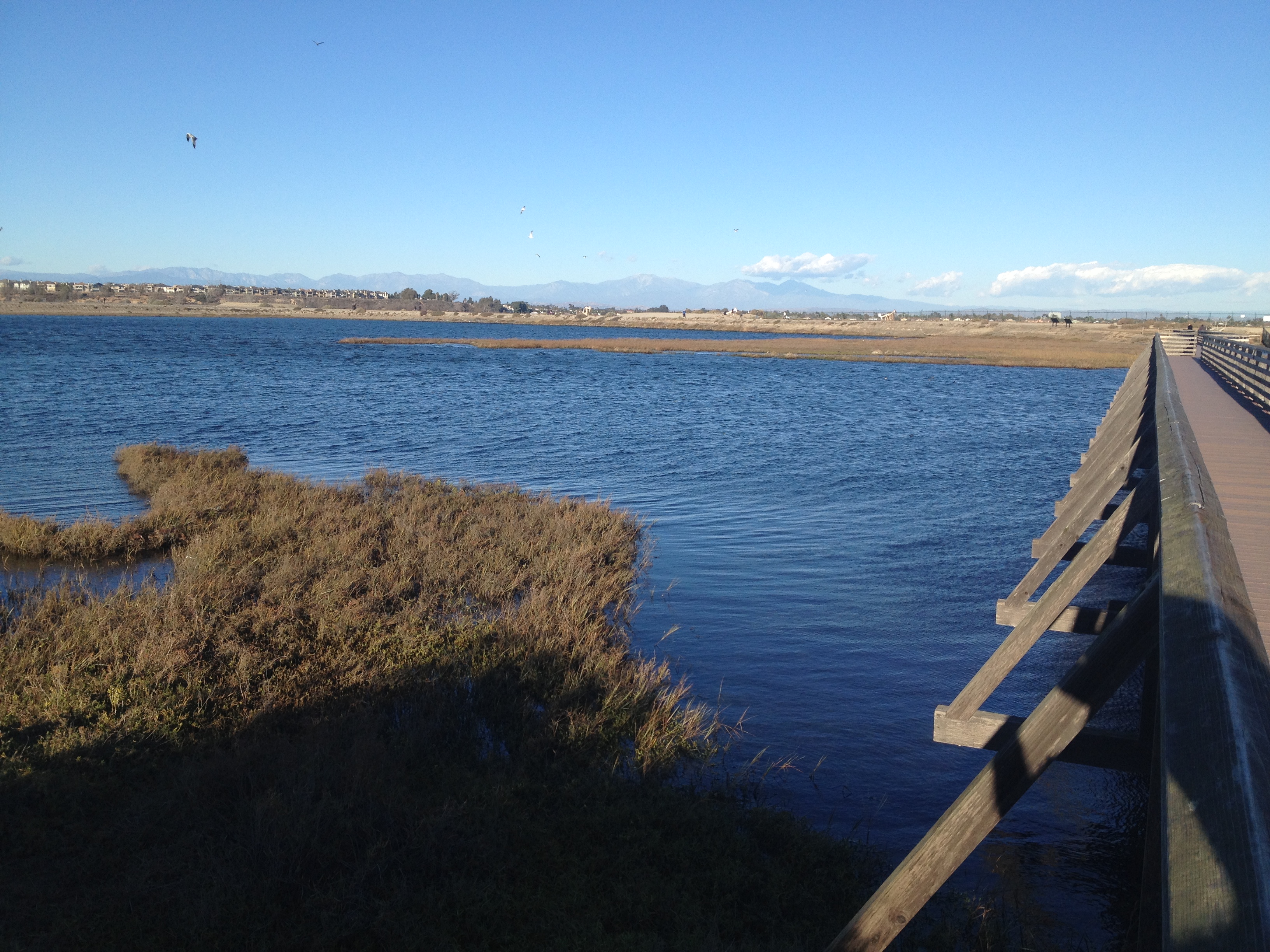 Wetlands serve as the filters of the watershed, O’Reilly explained. Water pours down from the river, bringing with it all those lovely pollutants we learned about from Algalita – hydrocarbons from motor oil, refined oil, antifreeze, all mixed in with bacterial contaminants. When wetlands are present, they catch these toxins. Plants absorb the pollutants into their bodies, or snag them in the mud that their roots hold together.

Interestingly, O’Reilly told me, these wetlands also catch something rather unexpected: Arsenic.

Arsenic, she explained, is a naturally-occurring element that is found in low quantities throughout California. As rainfall gathers water from the far reaches of the watershed, that water carries with it the trace amounts of arsenic present in the ground over which it passes. The element then concentrates as it nears the lower limits of the watershed, heading towards the ocean, until it meets a waiting net: Wetlands.

This is not the case, however, with everything that comes down the river. “I have learned to recognize areas where there are concentrations [of pollutants] near the surface by the condition of the plants,” O’Reilly told me. To remove the pollutants entirely, O’Reilly described, it was then necessary to remove the contaminated mud.

In Bolsa Chica, this is possible, because the mud has already trapped those pollutants.

In the Los Angeles River, however, years of development have meant that the natural wetlands can no longer catch these substances, because those wetlands no longer exist.

Of the matrix of wetlands that once defined the Los Angeles Watershed, only one now exists in the estuary: the Golden Shores Ecological Preserve, 6.4 acres of a former boat ramp that was restored to a natural state in 1997 to mitigate the habitat loss from the development of nearby Shoreline Park.

This means that those pollutants cannot be captured by wetland plants on a large scale, but instead go straight into the ocean. Heal The Bay’s annual report card gives the beach closest to the mouth of the LA River an “A+” in dry weather; in wet weather, however, that score goes down to an “F.” For reference, at a beach less then one mile away, the score maintains a steady “A,” even in wet weather.

More wetlands would not solve the problem of pollution, but they might mitigate it.

This makes it all the more vital to protect the wetlands that still exist.

Bolsa Chica Wetland is a truly special place. It cycles history back to visitors while immersing them in a natural environment that is unparalleled in such a heavily urbanized area. It battles pollution, fosters new generations of ocean fish and nesting birds, serves as sanctuary for migrating birds fighting hunger and exhaustion, and does this all simply as part of a natural process.

What then, can we do to help this process?

The answer is simple: Love it.

The most important thing we can bring to the wetlands is appreciation. The more we see the wetlands as the beautiful natural space that they are, the more our community will work to protect them. Every person that watches an osprey dive is a victory for our ocean. Every one of us that learns to care will bring more accountability to the coastline.

So, if you want to help, walk the wetlands. Follow Osprey. Watch for that rare sea turtle in the inlet.

And, should you ever find yourself awake early one morning, drive to Bolsa Chica, step out into the sunrise, and stand still enough to feel the air.

And listen the calls of the terns.

Follow as Tamara Lang and photographer Glenn Lewis follow the Los Angeles River from Long Beach out into the mountain tributaries through the LA River Trek, and join on February 27th for a Rain Day Watershed Fair and Photo Exhibition.

4 thoughts on “The Bolsa Chica Wetlands, Where Even Arsenic is Safe”