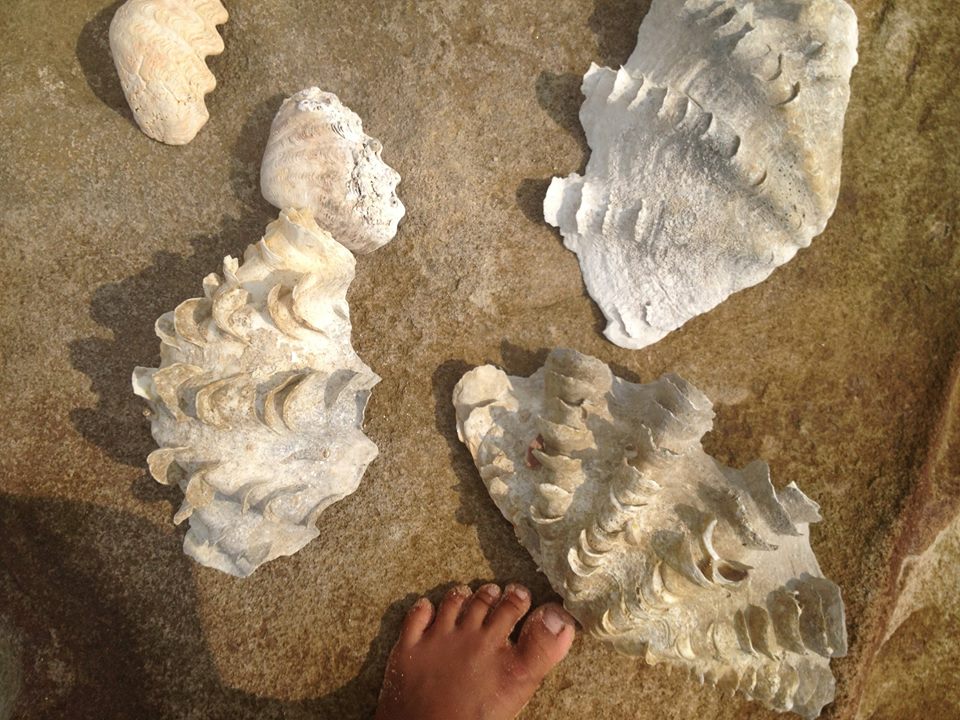 This Tuesday, I packed up my seashells.

I sat in bed at 2 pm with a gentle fever, popping bubble wrap and catching up on John Oliver. In the far corner of the room sat two open boxes, like the dead bug in an old still-life painting. The memento mori of my time left on Jeju Island, South Korea.

Two and a half weeks left until those boxes closed, and I still hadn’t yet realized I was leaving.

The episode finished and I stretched up, restless to do something productive. I couldn’t yet pack my clothes, or my shoes, or my snorkeling gear, and I still needed my kitchen stuff. My eyes caught on the tumble of chalky white shapes on the far corner of my desk.

Ah, I thought. I can pack my seashells.

I sat at my desk, its surface a flat wooden beach sunning beneath a black lamp, and picked out a handful of shapes. But it wasn’t my fingers that reached towards each shell. It was memories, their presence as thick as a fingerprint.

At the end, a small island of shells sat in the lamplight. I took a picture. Sent it to my friends Luke and Ashley.

“Both dead and beautiful,” I countered.

“A fitting metaphor for memory and nostalgia,” he typed back.

“Stop talking about sadness,” Ashley complained. And the conversation shifted back toward lioness gifs, cinnamon roll pancakes, and a kitten hugging his teddy bear in a bed shaped like a pie.

But that metaphor of seashells as memory stayed at my desk. Seashells are ghosts; they are the physical residue of a life that has been lived. They cannot be resurrected, they cannot change. They are frozen in time just as they are frozen in calcium carbonate. Moments that live on on physical form.

And they are beautiful.

They have color. They have texture. The can feel cool, or sharp. The closer you look at them the more you will see — tiny piggybacked worm homes, layers of caked color, perfectly round indentations that tell of some forgotten inter-species interaction.

They are as complicated as memories.

So, here are some of my closest memories from my last two years in Asia, each tied to one of the sea shells on my desk. Short and sweet and solid.

The Sand-Dollar Nose Ring from the Philippines

In January of 2013, Ashley and I went to the Philippines. For the first time ever, I found myself in a fully tropical ocean, swimming through fully tropical schools of fish above stunning corals, and christmas tree worms, and every other shape and color I’d spent my life dreaming.

Before we left we went for a final day of island-hopping in Coron. The boat dropped us off on the final tiny island of white sand, promising to be back within the hour.

We swam and sat and talked with the other passengers, a British woman and an Israeli couple, whom I had met the day before as we all sat on the top of the boat drinking red horse beer and warming up from our dive through a Japanese shipwreck. Now we sat on sarongs, the conversation breezing through our vastly different lives.

The hour passed. The boat didn’t come. Another hour. And another.

Now everyone was angry, a restless anger with no place to go beyond the footprints that paced back and forth on the white sand. I began to see why desert islands always served as the canvas for civilization falling apart.

I found a tiny sand dollar at the edge of the water, the middle part worn through. It just fit over the tip my nose. “Guys,” I said, turning toward the group. “It’s a nose ring.”

I kept that sand dollar.

The Seashell Ring from Jinta

Jinta found me just as I was laying down for a quick nap on the tiniest beach on the quietest corner of Koh Rong Island, Cambodia, a few bays down from my dormitory bed at the exquisitely isolated Lonely Beach.

She didn’t say a thing, just picked up a seashell from the sand nearby and placed it meticulously on the corner of my sarong. Then she came back with another. And another. The forth time she knelt down and held a minuscule purple clamshell right in front of my eyes.

“Whoooooa,” she said, pointing. I could hear the depth of awe in her voice.

We spent the next four hours sifting through the patches of thicker sand, picking out anything that looked different. She liked the small, colorful shells, the limpets and clamshells, and the snails so small they could have fit three across on her fingertip. I liked the corals, and the larger colored clamshells. All of them she arranged meticulously by size and texture along the edge of my sarong.

She found a green-and-white shell with part of the side missing, and forced it onto my finger like a ring.

I tried to edge away, motioned I was going snorkeling. Okay, she decided. Let’s go snorkeling.

And she did, in sandy tidepools 2 feet deep, wearing the mask upside down.

She found my camera. I showed her how to use it. A photoshoot commenced, in which I learned that I am a highly unsatisfactory model.

Then she turned to taking pictures of her own world. She wandered over to one of her past seashell arrangements, left like a ghost on a rocky point. And she took this shot.

What did she use to encapsulate her world that she found so full of wonder?

Seashells. The beauty of dead things.

I kept the ring.

This Saturday, I finally had a chance to go out drinking with my fellow students at Hansupul Haenyeo School, the course where I’ve spent every Saturday this summer learning the skills of the haenyeo, or the women divers of Jeju Island.

I was reminded of several things:

1. Korean culture is vastly cozier when you are inside “the group.”

2. Sharing a language really isn’t important when you can just go “whoop-whoop-whoop” with your fingers and have that mean “squid.”

But the best thing that came out of that evening, besides some good places to see “whoop-whoop,” were plans to see Oedalgae the next day.

In my last post, I listed Oedalgae as one of the better places to snorkel on the island. I was wrong: it is the best.

The water was clear and deep, with lonely rocks and the same sense of haunted time as a geological Colosseum. Schools of fish spun as shadows against the sun. I dove deep down, spinning onto my back, my bubbles rising up into the interplay of light and life suspended all around me.

I saw two shapes moving up, and down, between the light of the surface and the dusky boulders 6 or 7 meters below. A blond braid drifted behind one. They were two of the students from haenyeo class, gathering the sora from their secret crevices.

I dove down myself, and searched out a few of the largest sora, but only a few. I dropped them in the net, said hello, then kept swimming. On the way back I saw two empty sora shells, and kept them for myself.

Later we all sat on the rocks, our bodies freshly rinsed by the waterfall to our backs, slurping ramen out of shallow dishes. I tasted a now-spicy sora and decided I liked them much better cooked in ramen than raw. The octopus they had caught was likewise delicious, and much more successfully cut with a borrowed knife than with the sharp rocks I had half-jokingly suggested.

Below us families in inflatables crowded the rock pools, rolling exultantly with each dangerous wave. In the distance two bright fishing boats stood against the shape of the distant island. I took another slurp of ramen.

This, I thought, is Jeju.

I kept the sora shells.

My first year on Jeju was hard.

Yes, my life was scenic, but within that scenic life I found myself without the religion, the places, and the people that had given me my ready-made identity for most of my life. In their absence I had to re-define everything about who I thought I was, with strength I didn’t have and support I didn’t know how to seek.

It was a very lonely year.

But being broken down to nothing turned out to be the best thing that could have happened, because it was there I could see the people who had been there all along. They caught me at my lowest, and were there to help me build myself back up.

For my second birthday on Jeju we all gathered at a horse restaurant. Each course was delicious, and surprisingly so. But what was most special to me was that feeling of being in the presence of people who made a place seem like so much more. There’s a tangible feeling to that kind of presence, a hazy softness, the feeling of touch without the necessity for touch. The smooth simplicity of presence.

“I forgot to get you a present, so I stole this from the planter outside,” Glenn said after dinner. He held out an abalone shell, the inside still dusted with dirt.

“And here’s another one,” added Luke.

I kept those dusty abalone.

A Packed Bag of Seashells

I packed my seashells in pages from an old Nat Geo travel magazine, noting mentally that adulthood is realizing the consequences to having popped all your bubble wrap. The hollow sand dollar disappeared into an article about Cuba. The shell ring was added to a list of international movie locations. The abalones went in a camera advertisement. The sora in a picture of Detroit.

I put them in a pink plastic bag. I put that bag in a box.

The box itself is irrelevant. The seashells do not really matter. What matters is that every one of those moments and those people are a part of who I am, and what I remember, strung along like beads to form the stories and loves that give me my self. And that self lives, and by living well, creates new moments.

In two and a half weeks, I will leave Jeju. I will walk to the airport through the colors of this real, rich, vibrant island. I will hug it out with the beautiful people who have become my home.

Then I will walk onto the plane and leave them behind. The island in my window will shrink, dehydrate. Will condense into the hardness of calcium carbonate. The colors will darken, the days and nights thicken into waves and pinnacles of life, as intricate as a shell.

I will always, always keep those memories. And their presence will keep me, as I go off to live the next stories.

What are your seashells? Comment below and tell me.

4 thoughts on “Packing My Seashells”