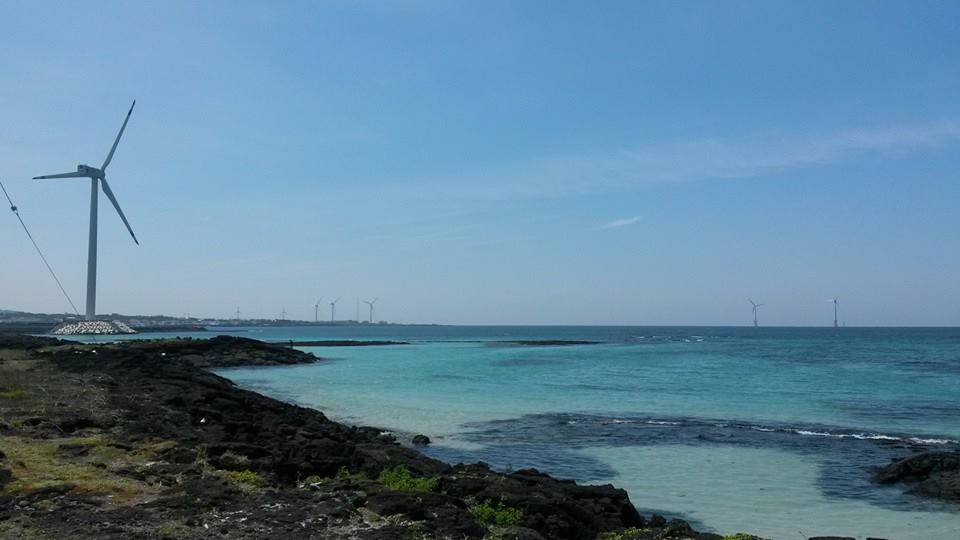 I sat at the bus stop in my neon yellow running shoes, headed towards my first 21-kilometer run on Jeju Island, South Korea. Next to me, my friend Natalie was telling me about her friends who were a few hours into the Comrades, the 90-kilometer (56 mile) South African ultra-marathon.

“There’s one soul-destroying hill,” she said, “and all you can hear is the sound of feet on the pavement. And you know that everyone else is going through the same ordeal as you. You build each other up.”

The bus came, and I found a seat. Our friends Jamie and Tim joined at the bus terminal.

Tim’s red shoes were worn completely through on both sides, and sewed together with fishing line. The red of the shoes had dyed the fishing line pink. He was trying for his first full marathon.

Jamie, who like me was running her first half-marathon, glanced at her phone to check on her mom, who was running Comrades for the 9th time.

Natalie, Jamie and I joined the growing crowd behind the start line, and I noticed how bright everybody’s shoes looked beneath their stalk-like legs. A field of neon flowers, turned petal-down into the earth.

Fireworks shot off. I danced my way to the start line and started to run just before the sensors, waving goodbye to Natalie and Jamie.

The field of runners moved onto the road as one body. Inside the stadium I could still hear cheering, but out on the road the only sound was the thump of rubber soles on asphalt. The thumping built, doubled by each runner, until I couldn’t separate the sound of my own feet from the rippling contact that trembled through the morning air, sound waves that stirred my skin as much as my ears.

The sound of footbeats formed a leaf boat, carried my mind back to the college classroom where I had sat beneath the sounds of a spring storm. A new quality of air had pulled me from the lecture and I sat back momentarily, my fingers lifting off of my keypad for a full three minute’s worth of notes. What I had heard was the sound of a roomful of fingers dripping onto their black Macbook keys, blending seamlessly with the tapping of the rain on the roof. Learning was a storm, I had realized, the harsh challenge of new ideas drenching minds, nurturing new growth. All of it wrapped in the uncertain sound of rain.

This road carried that same sound.

I told myself to keep a modest pace. I returned a thumbs-up to the spry man beside me, and he responded by telling me all about his son who worked in America at Texas Instruments, and the time he and “my friend, there” had run the Boston marathon in 2008.

“Running — talking — more difficult,” he finally huffed. “I must jacket my mouth. You must jacket your mouth.”

At the halibut farm, I listened to the steady shhhhhhh where runoff ran in waterfalls into the sea.

Wind turbines further on spun with the breeze, their white blades as elegant as egret wings. Their sound came in three beats: screee-fwoop-woop, screee-fwoop-woop. Looking up at them, I felt smaller than I’d ever felt beside a manmade object. The shadows of their blades outpaced me against the asphalt.

After the turnaround I waved to Jamie, then a moment later to Natalie.

The man with the son in America caught up to me as I skimmed the sea edge of the road, and told me I could save time by hugging the inside of the curves. I thanked him for the advice. I decided to myself that time didn’t matter, and I would rather stay near the turquoise blue of the ocean even if it meant further to run.

That was at fourteen kilometers. At fifteen, I moved to the inside of the curves.

My feet no longer struck the pavement with a solid thump; now they squelched loosely, the texture of dropped banana slugs. Around me I heard the same tapping of shoes, but it felt thicker now, more strained. I tried to remember if my body had ever felt this tired. I pictured my current limits spread out on a bar chart and decided that this run ran almost to the top.

I had thought it would feel good to feel so tired. Instead, I just felt tired.

I counted down the aching kilometers: only four more to go. Three. Two.

With one more kilometer left I pushed myself a fraction harder, then drifted at that speed for six paces, seven, eight. Once those had finished I pushed forward another fraction, then another.

The man beside me, a Korean whose long hair pulsed above a white t-shirt, moved forward by the same fraction.

I moved away from running and into the world of sound. I heard the pulse of the man’s feet against the pavement, the in-and-out of his heavy breath. My body ran beside him with an animal closeness, my memory saddling itself to the river valley in Mongolia where I had ridden at my first gallop. I had leaned into my horse, pushing forward into the blurred grey of the thunderstorm that smacked ahead. Thunder cracked, and my guide had laughed. “Chhhh, chhhh,” he coaxed our horses, and I leaned forward as the body beneath me lengthened into long sinews of speed. Hoofbeats sounded against the dirt that clumped under brown grass. Their sound felt wide and as damp as the sky up ahead.

Horses had different gaits. I wondered if I did, too. With the memory of hoofbeats still thudding in my ears I reached my foot out toward the asphalt then pushed off again, long and low. I felt my body lengthen, become something else entirely. In place of the jointed huddle of hips and shoulders I now was made of legs and arms, long and smooth, arcing over the asphalt. I didn’t quite believe these two feelings could expand within the same body.

We rounded the corner into the sports arena, my new friend and I, his beats now matching mine. He looked at me ecstatically. “You me fast, 500,” he tried, motioning towards what I guessed was some final 500 units of the run.

“Okay,” I said, and as our feet hit the track I poured every last shred of strength into the pulse of my legs against the hot sun. He flew forward and I struggled to stay even with the backs of his feet. He slowed as we reached the finish line, his hand drifting back to catch mine.

Alex waited at the tent where she’d finished her 10k. I chugged a water bottle as I hurried to grab my phone, then walked with stilt legs to the finish line where I waited for the rest of the group.

“Oooooh, sexy sexy!” a woman’s voice declared over the loudspeakers, each syllable hitting the ground like a raindrop, and I looked back to see an adorably innocent sexy contest taking place on the grass behind me.

Jamie finished with her arms to the sky and a massive smile stretched across her face.

Natalie ran in smiling, hand-in-hand with the Chinese man who had run beside her for the last six kilometers.

Tim finished his full marathon nearly spent, but he finished.

Then we hobbled together to the beach, where a grill soon sat laden with meats, and braaied until sundown.

I went for a swim in water as clear as rippled sun, then dried off within the words that dripped down around the braai. They felt cool on my skin.

Have your own running stories or favorite sounds? Comment below!