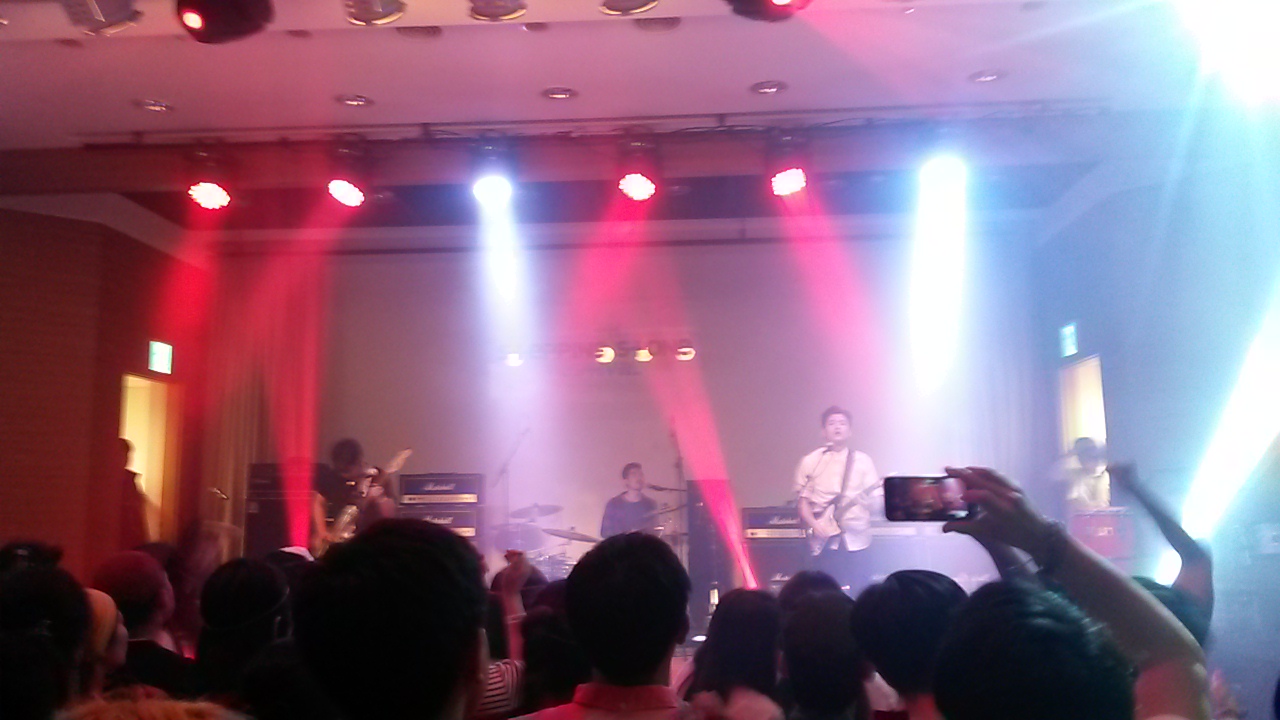 I love good lyrics. I love to dance. I love to sing. If you start humming a bar of anything in my presence, I will keep on singing that song, or something that vaguely approximates it, for the next half an hour without even realizing what I’m doing. With commitment.

But music itself bores me. I’ll put it on in the background while washing dishes, but no combination of guitar + base + drums + violin + whatever else will give me the deep-down thrill I find in the current of a well-written paragraph, or the shifting sky where that paragraph found its substance. No music has had the ability to wrap itself deep into my core.

I’ve heard it said that Stepping Stone is the best event on Jeju Island, and while I think the fire festival still holds that torch (badum-chhhh), it’s hard not to agree that this July evening on Hamdeok beach is one of the best nights you can spend on Jeju.

There’s dancing on the sand (usually).

There’s fire lanterns lifting off from the edge of the ocean (usually).

And there are more dreadlocks than I even knew existed in Korea.

And this year, there was also rain. Lots of rain.

We sat on Saturday at a home-cooked brunch at a friend’s house, having planned to head out for a full day of booths and beaches and slip-n-slides on the sand, all of which had made their appearance in earlier years. However, we had forgotten one thing:

Outside, the rain pounded the asphalt with more sky-water than my home state of California has seen in my entire lifetime.

When we finally left I didn’t even bother with shoes, but tied up my skirt and walked barefoot through the warm puddles. My umbrella held before me in locked arms.

We checked into our pension, then headed towards the stage. Predictably, this stage was not to be found on the grey swamp that yesterday had been called a beach.

Instead, just outside the hotel banquet hall, we found the right cluster of damp dreadlocks.

Stepping Stone had begun, regardless of rain.

Pink light, stuck through with rods of blue. Thick light, with a palpable presence, like breathable color. The crowd pulsed. Hands rose, outlined against the colored air.

Through the substance the guitar wound on, a sound that felt like wire, coiling through the room.

My friend came to join me, already dancing. “Remember when I said I didn’t like music?”, I shouted into his ear.

“Yeah,” he shouted back.

Dancing in Korea is the best. It’s hard to make connections through a language barrier, but if you can make a complete fool of yourself while flailing to music, there’s a good chance you’re going to find someone else who will be a mutual fool. No language needed.

And that’s exactly what happened.

There was jumping, flailing, shaking and spinning. All of it with total commitment. And all of it shared.

At the end, as a metal band screeched a few feet away, I stood on the stage with my friends, head-banging in unison with the group in front of us. Black hair, and brown hair, and red, and blonde. All with the same rhythm. All to the same music.

I really, really wish I could give you a good report of each band. But since my memory is terrible and I mostly just thought “wow” the whole time, here’s the lineup, courtesy of the Jeju Weekly:

Romantiqua (Bet you would have loved to hear about how they sounded!)

Ludistelo (Wow! Statistically they were great!)

South Carnival (Okay, I do know these guys. They’re a Jeju band, and there’s only two words to describe them: adorable and FUN.)

IAMNOT (…able to tell you any more.)

Apollo 18 (Wait, was this one even a real shuttle? Hold on as I google that…)

ZEN ALONE (Actually, around this time a guy was being increasingly obnoxious about hitting on me, when he said I had a zen-like presence. I told him yes, I did, as long as Zen was defined as complete lack of desire. And I’m just a little proud of that one.)

PeopleJam (Turns out Apollo 18 was not a real shuttle…though it WAS a space horror movie in 2011 that got 24% on Rotten Tomatoes. In case you ever need that information.)

But even though I can’t tell you anything about the bands, I can tell you this:

Their effect was spectacular.

The concert ended and we all drifted away, ears ringing in the night. In keeping with tradition, I wanted to do only one thing: run into the ocean. The only problem was, there was a typhoon.

Not even a problem.

We stopped by the pension and found our group, then walked down to the beach, all promising that we would not go into the water until it had been given the safety all-clear. Luckily, the tide was low, a quick wade told me that the water was waist-deep with minimal currents.

Let’s talk about that water.

Let’s talk about how it felt to stand in the warmth of a typhoon, with the wind driving warm raindrops into  bare skin.

Let’s talk about the palm trees, slapping sideways, lit from behind.

About the patterns of rain sweeping across the water in white dimples.

About the feeling of being a part of a single body of water, and wind, and ocean, tied together by the squelch of soggy sand between your feet.

About the way those gusts of rain on the water fit sideways over the pulse of light inside, beating the sea with the same fervor. Of sight instead of sound. Water over music. Wind instead of light.

Because this weekend, I learned that that’s all that music is.

One thought on “Jeju Stepping Stone – The Typhoon Edition”