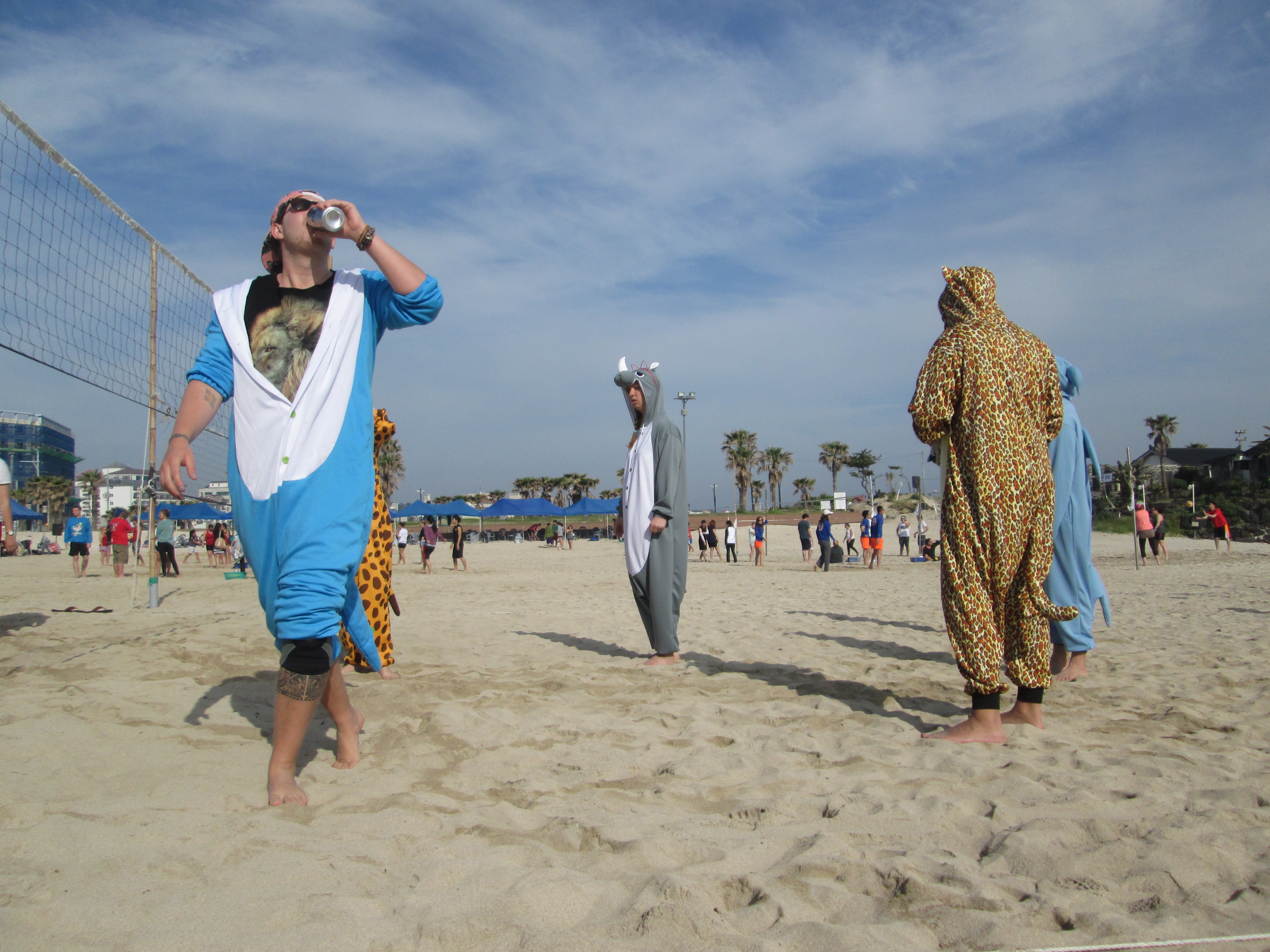 This weekend brought Jeju’s largest waygook event: the Jeju Furey Beach Volleyball Tournament. For two days each May, Hamdeok Beach becomes home to oddly-shaped sunburns, stray volleyballs, and a moving mosaic of team t-shirts. There are moves that people in the know might possibly call sets, or spikes, or rallies, as well as trembling nets and fist-up cheers of victory. There are looks of grim determination and awing shows of athleticism.

And then, there are the Sparkle Cats.

For two years and four tournaments, the Sparkle Cats have overwhelmed the courts in their pursuit of glory, glitter, and good cat puns. The rainbow Pusheen spray painted on our shirts is only the barest mimic of the exuberance in our hearts.

It’s time to share the wisdom of Sparkle Cats with the world. Here’s how we fail at volleyball with style.

1. A Cause Worth Failing For

Several weeks back, one of the founding members of Sparkle Cats boarded a plane for China and beyond to focus on his photography career. We wish him the best of luck, even though luck can’t be wished and Glenn Lewis is talented enough not to need it even if it could.

The courts quaked at our Glenn Lewis memorial haka.

(Random note: My gift to you today is the fact that the word “failing” is so similar to “flailing.” Let that fact rest in your mind’s eye, like a little gif composed of language.)

2. A Team Built of Lions, If Those Lions Were Mid-nap and Dream-singing Katy Perry

But it takes more than a pair of cat ears to become a Sparkle Cat. One must be seriously unserious.

We take the dedicated.

We take the determined.

We take the detached.

We take the delightful.

We take the dour.

We take our slaves (thanks Jen and Melode!) and supporters (wut wut Andrew and Mariek).

…And we take the weirdoes who run off into the ocean whilst wearing a shark onesie.

In the words of the immortal Glenn Lewis: “Guys, we’re winning the dance competition!”

Nothing else needs be said.

4. The Best Animals on the Beach

My laundry on Monday consisted of a pair of leopard-print ajumma (old lady) pants, a t-shirt spraypainted with rainbow Pusheen, one shark onesie, and one cheetah onesie.

On Sunday morning, an observer looking across the beach would have seen a menagerie of onesies gathered on court 10. There was a dinosaur. A rhino. A cheetah, and a jaguar, and a white tiger. A land shark.

And all of us were dancing.

You got me. This isn’t a way to fail. It is, however, the best way to live.

In the basement of the hotel behind Hamdeok waits one of my favorite aspects of Korean culture: the sauna. We slunk guiltily in our grubby uniforms through the poshest of hotels, to the elevator that led down into the basement.

6,000 won (US$6) later, I was crisp and clean and naked in a room of women who were similarly naked, with our pick of hot tubs, very hot tubs, cold tubs, tea tubs, wooden tubs, massage-jet tubs, and steam rooms. There is nothing, I repeat nothing, that feels as good as sinking into a hot tub as the shock of warm water quivers through tired muscles.

Muscles that are tired from dancing, that is.

Afterwards we met up for a chill drink beneath an overachieving sunset, then headed off for some barbecued samgyeopsal, or belly pork, as only Korea can do.

Then came the dance party. I ran into the ocean.

Try not to sound too surprised.

6. A Mildly Amusing Lack of Sleep

Sleeping in a tiny tent village can be a great idea…until it isn’t. Such as when your dearly beloved teammates decide to talk nonstop at 2 AM, at which point I was already fast asleep after the calming (but worthwhile) influence of the night swim.

Meanwhile Ashley, my dear tentmate, lay brimming with angry wakefulness on the far side of my tiny, tiny tent. Over the top of her sleeping bag, the furiously sewn eyes of her rhino onesie stared me blindly down. Streetlights glinted off her white horn.

If you’ve ever watched a rhino in a sleeping bag hurl obscenities with total commitment from a 2-person blue kids tent, then you’re on your way to knowing what it means to be a Sparkle Cat.

7. Fun Above All Else

It’s sometimes tempting to prioritize grandiose cultural experiences over just plain fun. Yes, when it comes down to it, Sparkle Cats is a bunch of foreigners getting drunk on a beach. We’re not off practicing Korean, or visiting new temples, or communing with nature. We’ll do those things next weekend.

But having fun is not just something you do to take a break from learning. Fun is its own experience.

Weekends like this are opportunities to think creatively. To respond to the people around you. To celebrate the special beauty waiting within friends, or feelings, or places. To enjoy life and all that it has to offer. Including but not limited to Sangria.

Because if Sparkle Cats know anything, it’s how to have fun.

So……yes, we’re not so good at actually moving the volleyball.

Yes, we passed up far too many opportunities to run into the ocean.

Yes, we may have broken Eric.

But Sparkle Cats define ourselves, in the manner of true cats. We define ourselves through dancing. And cat piles. And invocations to the memory of Tina Turner. And rhinos who still dance, even despite angry morning face.

No team has ever found such sheer joy in each point as the Cats Who Sparkle On. And that’s what’s I call a win.

All day. Every day. 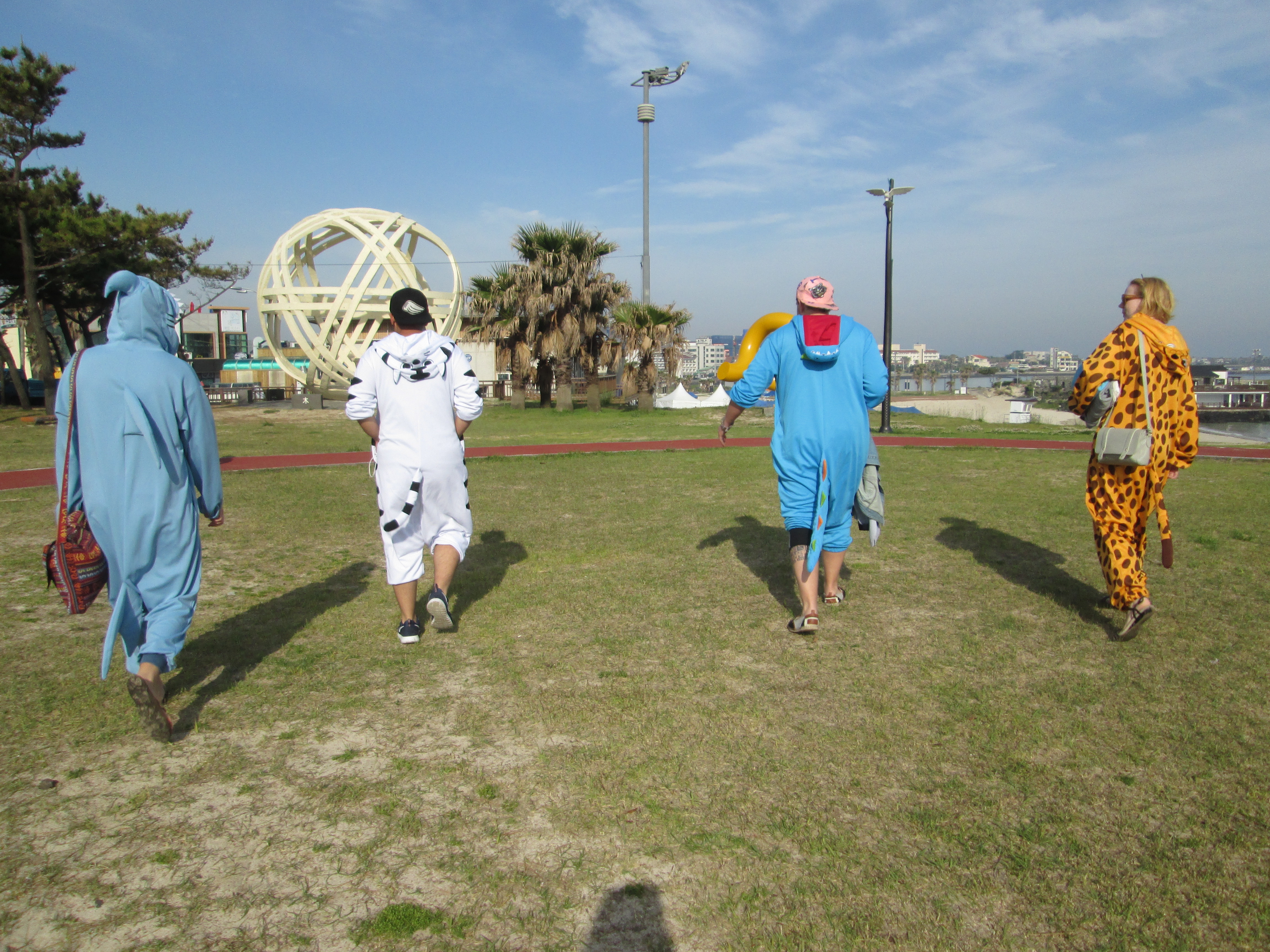 One thought on “How to Lose a Volleyball Tournament with Style”