I write this from Port Douglas, Australia from the interior of something that has been a rarity in my life: a house. Outside, on the coffee table, a homemade vase holds flowers that I brought home from my weekly visit to the Sunday market flower stand. The freezer clasps a steadily decreasing supply of fish. In the driveway sits a car that I will drive to work in a few hours. This morning I went on my third run in three days. I bought myself a loofah. 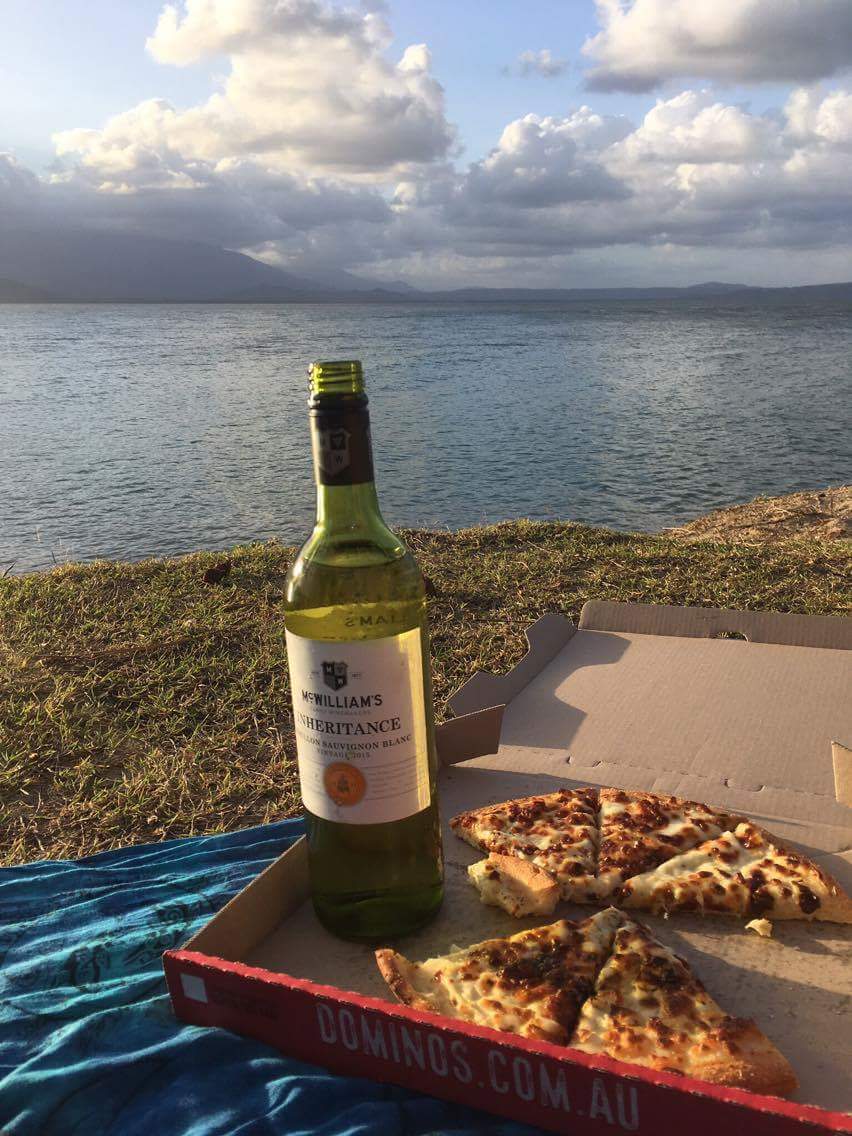 And left behind this routine…

In short, In Port Douglas I have somehow managed to become domestic. And this is more confusing than anything else I have encountered on my travels.
While in Kaikoura, New Zealand two months ago, as my dear friend Lisa Bond drove my sister and I to the mountain where we would sleep that night, she mentioned that my name had come up in regards to a position at the study abroad program that I had attended. “I told her Tammy couldn’t sit still long enough,” she chortled (and Lisa Bond is the only person I know whose laugh perfectly matches that word).
The thought struck me as odd. I had never thought of myself as someone who could not sit still: my mental image of perfection usually hung rosy-lit in the form of a cabin somewhere, blue on the windowsills, with wind in the trees around me and an endless space of time to write. Or space to write after I had seen and done absolutely everything else there was to see and do in the entire forest and then possibly the planet, as well. 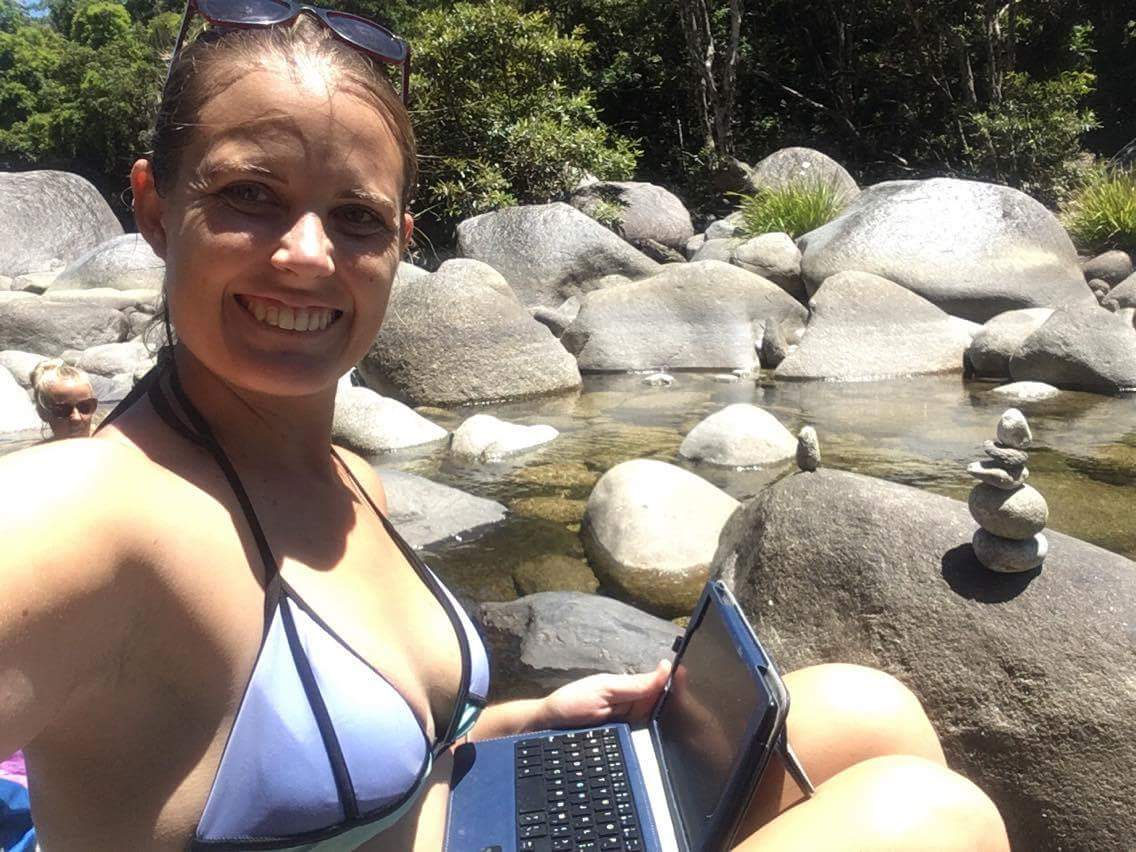 The more I thought about it, the more I realized that Lisa Bond was, as usual, right.
I had known this in some capacity, of course. Even when happiest there was always a magnetism within me, pulling me in any direction but where I stood. I could not sit still while there were mountain peaks I hadn’t climbed or some new combination of sunlight shadowed through schooling fish. It wasn’t the lack of love that propelled me way from a place, but the opposite: I loved each moment too dearly not to discover the next. I could not lie still and silent and be happy.

And so I left places and I lost people. I chased the feeling of detachment, when the road stretched before me and I carried my world on my back with no idea where I would sleep that night. At each step my world was created anew, and that new world filled me with joy, but with its birth all others dissolved behind me.
I do not have one home; I have a planet full of homes. And this is why I will always leave.
This is why I was not in Kaikoura a few weeks later, when an earthquake shook the town and upended the lives of the people I love. When the road became a mountain, and the waterfall where baby seals had swam filled with stone, and when the land itself rose a meter out of the sea, I was not there to watch the tidepools drown in air. I was not there to help the people who made my first overseas home. But I felt the loss, and I felt for those people, and though I could not be there I knew that none of that love had faded. 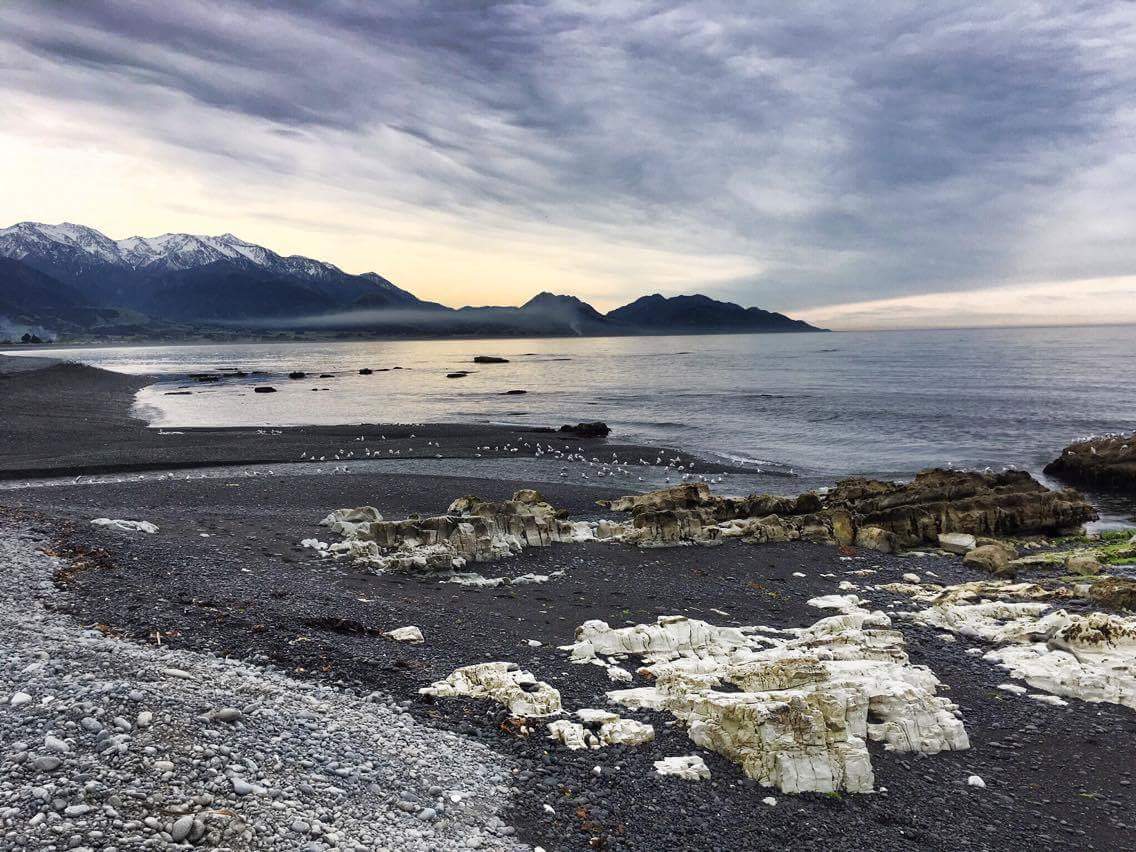 Kaikoura is just too special

(Kaikoura is working hard towards recovery, by the way, with a number of shops and tourism operators open for business. They’ve also opened the entire town up to online shopping, so Christmas gifts can be bought through the main site if not the main street. Kaikoura is and always will be a deeply special and stunning place. And they need some serious loving.)
And after all of that loving and leaving, first in Kaikoura, then on Jeju Island in Korea, and then in California once more and in Seward, Alaska after that, I am in a home. I have a routine. And I will not leave, not for a few months yet.
And this is terrifying.
Earlier I said that traveling creates a world with each step. If I am honest it is this creation that drives me forward. I fear very little in life — not snakes, spiders, big seas, not traveling alone — but what I fear more than anything is living a day that creates nothing. A day that helps nobody. A day of only biological existence. A day on the couch. This fear is insecurity at its deepest, at its root the doubt of my own validity of existence, but though I realize there is value in repose, I still cannot sit quietly at the side of a pool. And I cannot write from stasis.
I would be lying if I left out that this season of still drives me crazy at times. That having a tv with netflix, next to an artificial fiber-optic Christmas tree and a ceiling fan that folds away the syrupy heat of midday, threatens to hollow out the interior of my time. That I have all of the time until 6:00 tonight to write or learn or create, and yet I drift instead between pockets of inaction. That I cannot bring myself to write the book I came to Australia to write because I am no longer solid in myself. That I wander instead, drifting, uncertain of my story. 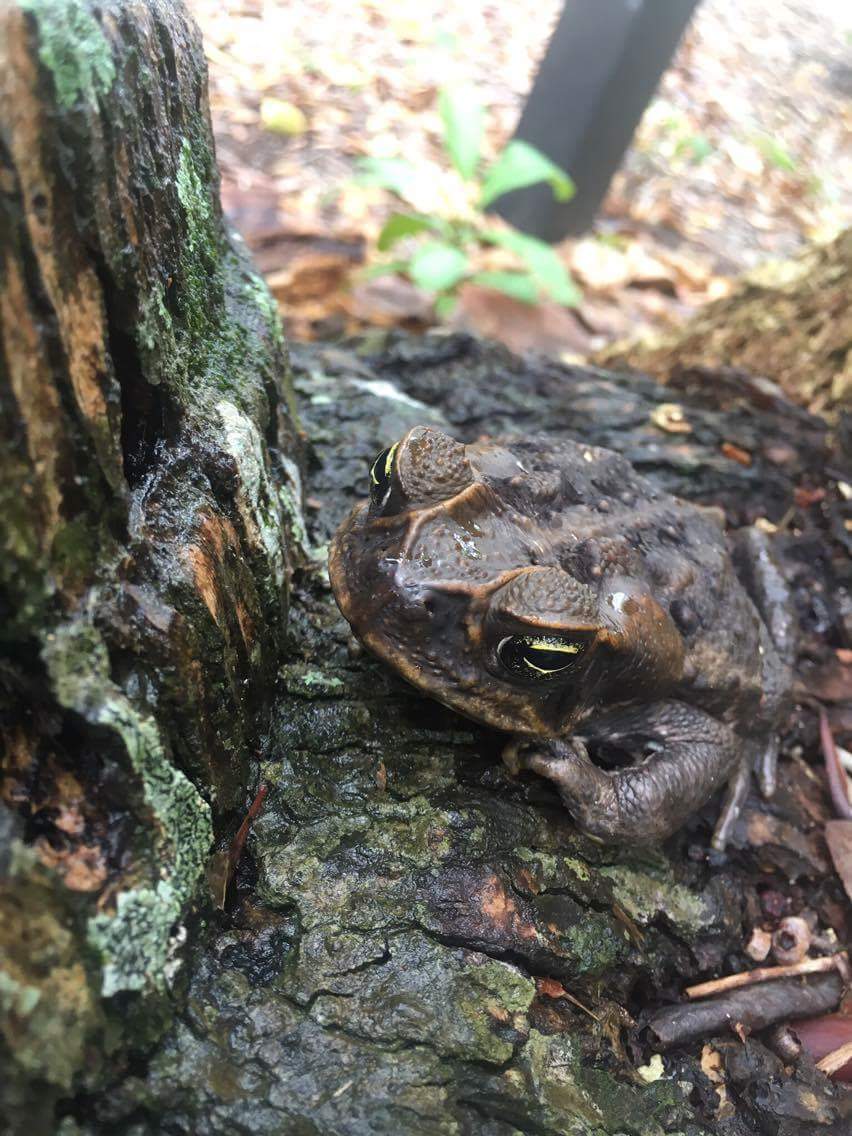 There is a pool in the backyard of our house, a folding circle of a pool with floating islands made of plastic squirt guns and inflatable drink rafts. I lay in the pool last week, on a yellow raft, with a bottle of Great Northern floating in a pink flamingo to my side. In the quiet wind I drifted aimlessly, from round side to round side, intersecting only with my drink. My mind outpaced my motion and so I focused on feeling instead: Cool wind on wet skin. Waxy purple flowers spilling over the bright blue walls. A wasp with a thin waist investigaging each blossom.
“I’m making this pool into a metaphor right now,” I told my housemate as he sat on the couch nearby. I was drifing, aimless, creating only sensation. And I wondered if that was enough.
I crave motion instead, and discovery. I avoid standing water and the soft side of lakes. I follow currents, and wind. I read books and try to understand more of what being human means from within the interior thoughts of other lives, to know how the world looks from within a different set of eyes. I crave to stay in motion.
And this, I realize, is what draws me to the sea: there is no moment on or in the water, not one, when your world is static. On a boat the world is constantly in flux, continually changing into a new moment of water and wind and the world beneath. Motion spins down to the level of molecules. And in the continuous transformation of sea it is impossible to sit still and stagnant. Impossible not to exist in motion. 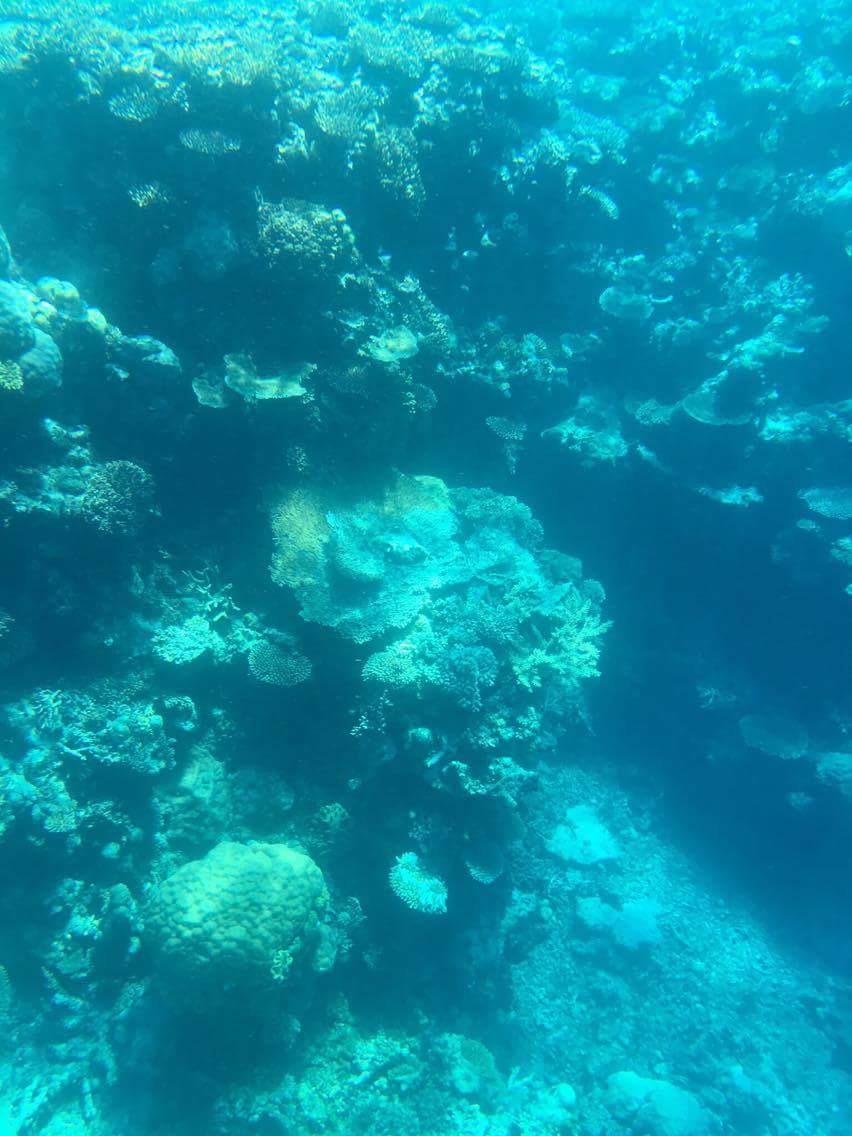 And so this summer, when Seward, Alaska becomes the first place to which I return, I will not go back to a home. I will go back to a sea.
But for now, I force myself into motion. I run on the beach in the wind and bring home bits of shell as promises to return underwater. And I absorb the beauty of all that I did not say in that first paragraph: that the flowers that sit outside rest beside green tree frogs who nightly break us away from our beers. That the fish in the freezer comes from the reef, where my housemate lives most of the week. That the car is a beautiful four-wheel drive that we took a few weeks past to an offroad dump on a mission for materials to weld a firepit. That on that daily run I go past a sign warning of crocodiles to dodge portuguese man-of-war (bluebottles) washed up onto the sand. That I share this house with some particularly special people.

That drive to that run

I wrote this yesterday, before work, then drove off to a blessed flurry of waiting tables and serving cocktails before time slowed down again to the pace of a moon so full that I walked to the car through light that pillowed the space between palm trees and a sea hot with light. This morning, I woke to rain so strong I felt it straining, harder and harder, like a breathing thing. And now I sit outside, beside those flowers from the market, as the sun flashes down in the breaks between rain, while lorikeets nose through the neighbor’s flowers and fantails (or something similar) flash their tails on the wet hammock. I can hear life in the lit leaves around me, almost feel the waves of sound from birds I don’t know quivering in the air.

And then the rain speared back through the sunshine and built, pulse by pulse, until the water formed a flat grey against the trees and the sound drummed through my keyboard. I dropped my kindle and ran to put on a bathing suit, then lay  on the yellow raft in the pool and stretched out to the sky. Rain smeared my sunglasses. I was fully underwater, wrapped round with the water that pooled on the lawn my housemate quickly seeded, the water that created the life around me. And I sank into the immediacy of round rain on skin. 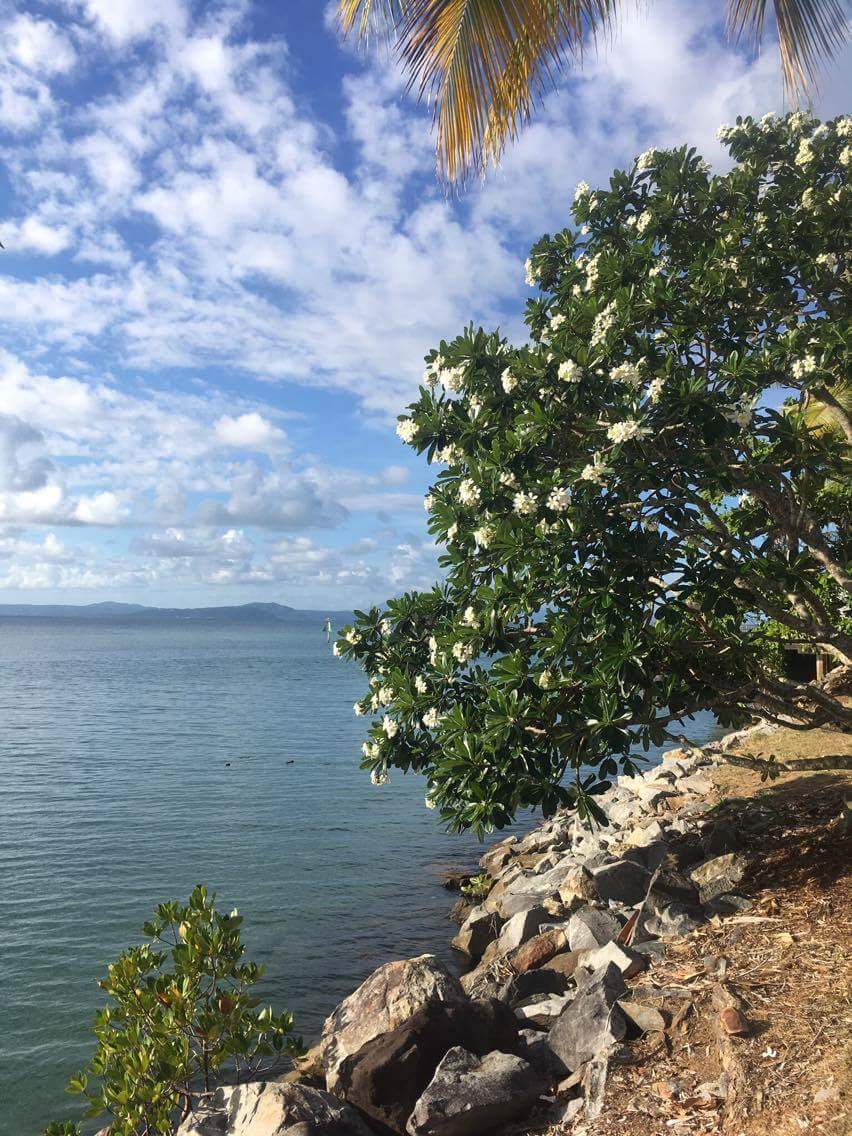 Forming life such as this

And all of this is beautiful. And all of it is in motion. I have had a cup of coffee, and I have time with good friends to look forward to at the end of this day. And it is in these moments of brightness, as rich and as new as the sea, that Port Douglas becomes a home.