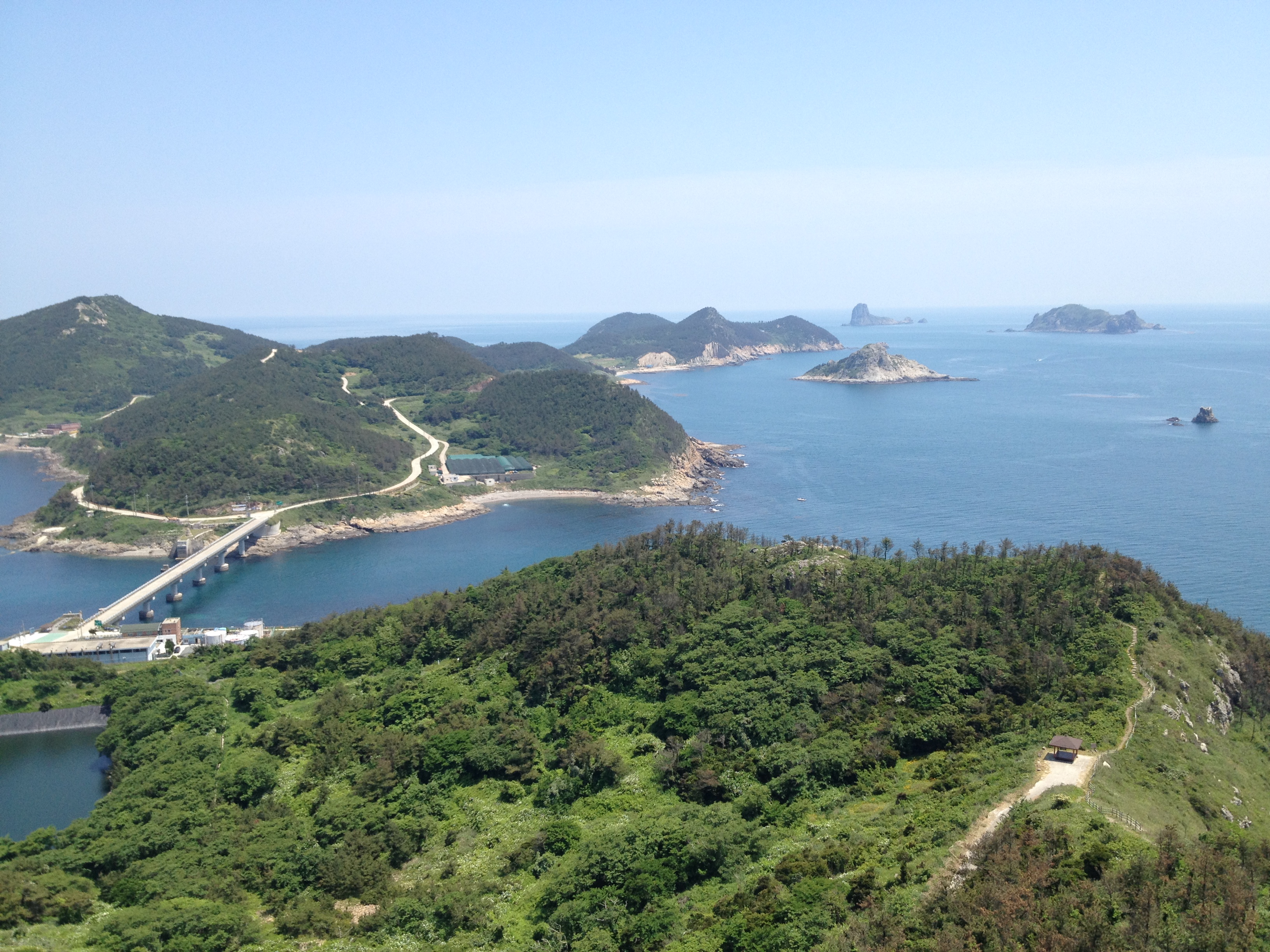 Islands are an addiction.

Wherever you stand, whether on an archipelago, an extinct volcano, or a continent masquerading as something self-contained, there will always be a smaller island.

This weekend I found myself on Chuja Island, a tiny dot of land alone in the waters off of the Korean peninsula. Thirty miles from both Jeju Island and the Korean mainland, the island is less than four miles long and barely a mile and a half wide.

Chuja doesn’t have to work to feel small.

Standing on Jeju Island on a rare clear day, I’ve sometimes glimpsed the ridgeline of Chuja emerging from the ocean horizon. It looked tiny. It looked isolated.

A three-day weekend gave me the only chance I would have to make it to Chuja before leaving Jeju, so I booked a spot on the Pink Dolphin ferry for Sunday morning. Saturday evening at sunset, during an impromptu glass of rooftop wine, my friend Natalie decided to join as well.

My spirits were high as I walked towards the gorgeous catamaran waiting at the docks, with two levels of decks promising the perfect amount of seaspray. The water stretched smooth and windless. It was the perfect quality of sea on which to be headed out toward an ocean horizon.

But inside a crew member hurried me to my airplane-style seat. I looked up at the distant windows; there were frosted with a yellow film, which kept both sun and ocean out. And when I walked to the door on the deck, a large red sign informed me that that outside areas were for crew members only.

We were to spend the whole trip inside the cabin, with covered windows, while 30 miles of gorgeous ocean passed by unnoticed.

As I walked back to my seat I glimpsed a window seat that sat empty beneath the direct sunlight where the window film had faded, so I slid in and watched the ocean instead.

Just before we reached the island, a single dolphin performed a single backflip. I never saw him again.

My plan was to hike Olle 18, the last of a series of Jeju hiking trails, but I found myself exhausted after having had only four and a half hours of sleep the night before. This was owing to an all-too-perfect night of homemade bulgolgi pajeon (meat pancakes) and makeoli (rice wine), followed by a viewing of “The Boat that Rocked” with tea and biscuits.

Instead, we found a smooth place above the graveyard to pitch our tent, and I chugged an energy drink before laying down for a powernap.

The energy drink was fizzy. The bottom of my two-person-blue-kids-tent crinkled above the grass. Those two sensations blended into one. “There’s a feeling in my brain that’s coming to me through my ears,” I commentated to Natalie, then stopped. “Oh, wait,” I realized. “That’s just called hearing.”

I felt like a new person after the nap. Natalie decided to join me on our walk, and we headed off on our merry way.

The trail started through the town, leading us through the narrow alleyways of orange-tiled roofs that felt almost mediterranean beneath the dry sun. I could tell by the sharp, scrubbed streets that these villagers took pride in their homes.

Standing on the steep hill above the port, I had to wonder if the villagers here had chosen their orange roofs solely because they looked so bright against the ubiquitous blue of the sea.

We followed the trail up to the lighthouse that sat on the highest point of the island. The smaller islands looked unreal as their Dr. Seuss shapes of green and white dotted the unbroken plane of blue, a message in braille for the fingers of a giant who would never come. My imagination wandered; after having spent so long along the soft volcanic hills of Jeju, these rocks felt dizzyingly surreal. I watched four raptors navigate invisible currents high the hill, more birds of prey than I’d seen in almost two years on Jeju.

The trail moved down and we moved with it, across a bridge and into the interior of the second island. We walked through forests and past a rock quarry, passing the sunny village of Mukri where I drew water from an actual well and then poured it back a second later when it looked less than clean. The sun fell at a slant, luxuriously stark. We made it to the second port and stopped for a kimbab and biscuits.

By the time we had finished eating we suddenly realized we didn’t feel like walking anymore. So, we started walking again, this time on the main road.

Within a minute a truck stopped, and motioned us into the bed. We happily complied, without the faintest idea where we were going.

The truck veered across the island. I saw a field of poppies and pointed them out to Natalie. We stopped off at a small house, and two more men hopped on back.

“Where are you from?” Natalie asked.

“Indonesia,” they replied. She compared words in Indonesian and Afrikaans while we drove along the spine of the island. Water glinted around the silhouettes of smaller islands.

I leaned back, intoxicated by the feel of the wind rushing over the cabin of the truck. Colors shifted in mosaics, blues and green, the red kelp and white rocks, the white in Natalie’s smile and the matching white in the polite grin of the Indonesian man.

The driver dropped us off at the main port and we wandered back to a smaller beach where we lay down on the steps, watching the fish jump, and trying to decide what to do next: barbecue, sauna, or sunset wine. We opted for wine, but learned as we bought it that the sauna was a lie, so we walked up to the top of the hill and watched the sun set over the islands.

The sun sank lower, turning gold water into pink. From the wall of a graveyard we finished the bottle of wine.

By the time it was dark, we were quite ready for barbecue.

“Where are you camping?” the lady at the convenience store asked as we stopped off for a post-barbecue ice cream.

She looked startled and shook her head “no” when we told her. With both hands she pantomimed ghosts flying at our faces.

“It’s okay,” I assured her. “We are brave.” Her face relaxed, as though that changed everything.

The night passed with smooth quiet. The only ghost was the call of a bird I didn’t recognize, which melded into my dreams with images of a long-gone parakeet.

Monday morning I woke up to a bird that was not at all similar to a parakeet. For a second I let the silence around us fill the tent, but the two-person-blue-kids-tent did not win any points for ventilation and so we moved outward, into the morning.

I packed my vast amount of snorkeling gear into a backpack that soon was as dense as Natalie’s South African Christmas cake. We walked down the hill to the convenience store for a delightful breakfast on the harbor, then took The Bus to a road that disappeared tantalizingly over the farthest hill.

We crested the hill, and stopped. Below us another cluster of islands rose, and then the ocean stretched, windy and blue, all the way to the horizon where Jeju sat as a faint blue stain.

“That’s it,” I said to Natalie, resting on a railing. “That’s all our little lives.”

We walked back down the hill to the bay that waited below, sparkling with hues of aquamarine and purple-black rocks, a darker ocean bottom than on Jeju but with the same clear waves lapping at the shore. I stepped into my suit of oceanic armor and made my way down to the shore, careful of the green algae slicking the lower rocks.

The water came as a shock of cold. I could feel the distance from Jeju in the cold ache that hollowed the tip of my nose and the edge of my ears.

I followed the shore out until the cold faded from my skin, and I could finally see the colors that waited beneath. Translucent spheres lined with iridescent orange clung to the lower brown algaes, and I had no idea what they could be (I later learned they were sea hare eggs).

In the cold water the brown algae grew upwards to the sun, drinking in nourishment from the waves that would form its death when the water warmed. I dove down, spinning on my back to watch the sunlight sifting through the tall, rich columns. Pearly pink fish spun lazily through the upper canopy. Sun transformed the gently swaying columns into a forest of pure gold.

This wasn’t kelp, but it was close enough.

By now the water had settled into me with a deep chill. I made my way to the rocks, and a flounder flapped away underneath.

Then I made my way back to Natalie, and we hitchhiked back to town.

In a flatbed truck. Naturally.

-The Pink Dolphin ferry leaves the Jeju City ferry terminal at 9:30. Reserve in advance for a guaranteed seat, or arrive early and try your luck. Return trip from Chuja is at 4:15. Both legs of the trip take roughly an hour and a half, and if seas are rough, I highly suggest finding seasickness medication beforehand.

-The Hanil Express car ferry leaves Jeju City at 2 pm and returns from Chuja at 10:50 am, and takes slightly over two hours each way.

Been to Chuja yourself? Have stories from your own island addictions? Comment below!

2 thoughts on “Chuja Island by Foot, Fins, and Flatbed Truck”