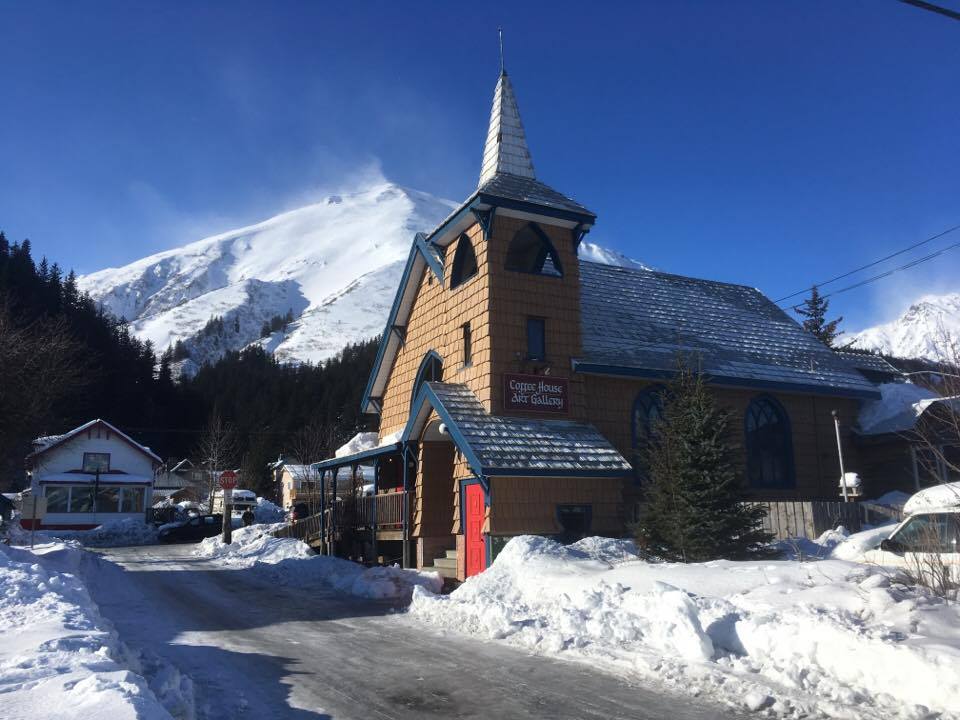 Exactly one month ago, Seward brought me back. I sat tracing mountains from memory at the same loft window of the Resurrect Art Coffee Shop where I currently sit writing these words, a matching cup of coffee curling steam on the windowsill. One month ago, my mind had pounded with the wind whose blunt fingers gripped my window through the night. With the wind-screaming silence of my room that I tried to drown out with the copy of Moana on my laptop and the only unclaimed booze in the house: marshmallow-flavored vodka. With a cold room and the cold thought that home is impossible.

“I am back in Seward,” I had written.

“I sit in a faded armchair, looking out the peaked window at the white mountains across the bay, and the mountains have changed. Ridgelines lie sharpened by snow, their edges clean, white outlined by shadow. Wisps of white float upward as the wind spins clouds out of lifted snow. The blue of the sea levels out and the whitecaps assert their shallow height between peaked horizons. It is a world of white, sculpted by wind. A cold and wild truth.

And I am as jagged as those peaks.

This year has been hard, in ways,” I had written. “I have never felt more directionless than I have in the past five months since I left Seward and the States for Australia. My words freeze in my fingertips. I cannot write, and I have not done well at anything, and I cannot help wondering if the world has been made at all better for my presence over the last few months. I worry that it has not.

I am closer to thirty than to twenty,” I had continued, “and I feel it. Feel the years of travel stretching taut until the tension sings in my ears. For the first time I find myself wanting, not an unknown road, but a home. Someplace (or somebody) to which I can return. A destination at the end of the drive.

And so Seward is the first place in my life to which I have returned.”

Then time had called, and I had closed my laptop and carefully walked down the iced road to the Breeze. And friendship resurfaced.

And the month between these two armchair moments grew into a life.

I woke to white mountains dyed pink with sunrise, and watched the wind sweep clouds of snow from peaks into the sky.

I held worry in my shoulders and hid it in my smile. I stepped into the self with edges of xtra-tuffs and carhartt jeans and a work hoodie, wrapped my days around the grip of a drill. Colored my evenings with the sheen of Mount Alice gleaming through a mug of Alaskan Amber, friends new and old spinning circles of warmth around our table. I re-learnt how to breath.

And one night, as the clouds grew heavy with the promise of color, I walked down to the harbor in the warmth of a hoodie. Light turned ice to penniless gold. I wandered along the docks, watching the islands of ice suspended on bowlines, their undersides of icicles reflected below to form stalactites and stalagmites only halfway real.

But then the light tugged upward on the mountaintops, and I followed it to watch from the top of the dock. In Seward, to watch the sunset, you face east. With your back to the mountains that mask the sun you follow the shadows of peaks you can’t see, and as the sun sinks lower the stripe of color rises and shrinks. Color condenses, gaining life as it narrows. In the dense pink you find peaks you never knew, their secrets betrayed by purple shadows on warm slopes. Gaudiness uncovers truth and the world stands naked. When the sun sets in Seward there is nowhere to hide; even in shadow the light demands your full self. I watched as a line of staggered peaks grew so sharp they pricked the day’s finger, drew the color of blood into the snow.

“I love you,” I heard myself whisper, and there was nobody beside me but the entire world.

And I realized in that moment that even with the whole planet stretching beneath me, Seward was home.

I can’t tell you how beautiful and terrible were the weeks that followed: Freezing spray on frozen cleats. Tying lines with raw hands. Waterspouts spun on the water, tornadoes of freezing salt, yet in them I found rainbows. One day, as on the Fairweather Express we curled inward to the waiting arms of Cape Resurrection, I looked up from the second deck to see the kittiwakes spinning like snow beneath the cliffs just as thick flakes of snow dropped down into the brim of my beanie. And the sea lions sat in snow flurries above blue water, an eagle in the distance marked by his snowball feathers.

Then came friends in a van, and the only dog I’ve ever loved, and as we stood around a fire beneath the glowing mountains I realized that the circle had closed. And when one of those friends spotted a green bar across the sky behind Mount Alice, we followed the lights to a frozen lake where we walked out into the flat truth of the aurora. And it didn’t even matter that we were only fifty yards from where I had first seen the lights, swimming in water where now we walked on ice. The circle had brought me back to my own self.

And after a month and a lifetime, I was home.

One thought on “Back in Seward”