“It feels like someone sang a song, and that song turned into stone, and that stone became a city,” I said, as we walked out of a heavy stone church into the chalky morning light of Salzburg, Austria. I still carried the feel of the inside of the church within my shoulders — the empty white space molded by the liquid sound of an unseen choir. Hovering notes, mercifully short of perfection. Footsteps, thickly veiled, heavy with the solid proof of a bodily creation. 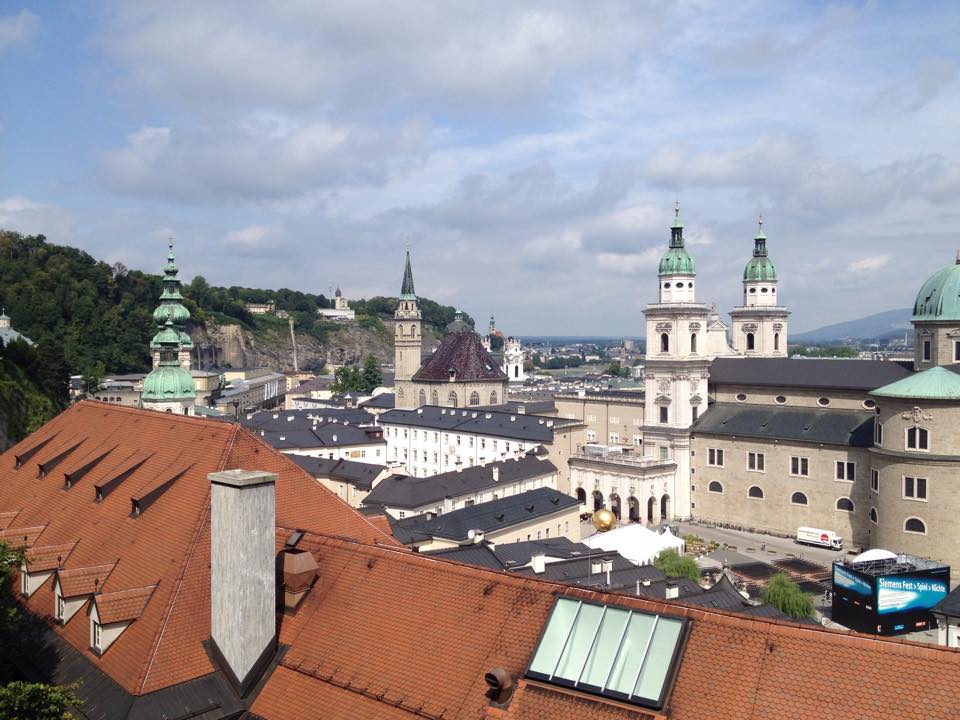 Michelle and Jen looked at my words in surprise. “I can do it too,” Jen said. She straightened, looked for a subject, found it on a bush. “…And the light shines through the leaf, illuminating every soul In the city.”

Michelle wrinkled her nose. “That sounds kind of creepy, if you think about it literally.”

We kept walking. The pathways worked their way up, meandering toward the long white castle at the top of the hill 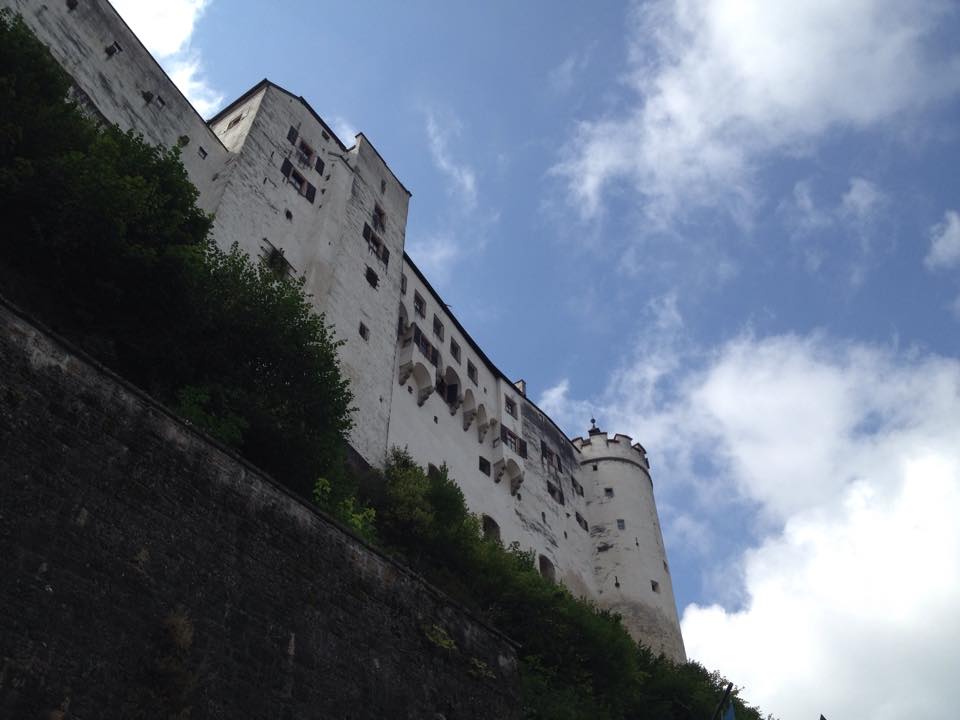 We reached the castle, but decided against the 8 Euro admission price. Instead we walked along the lower battlements, found a wall, and sat with our feet dangling over the white stone and green spires of the city that had given birth to both Mozart and The Sound of Music. I could feel the city breathing, feel music rising up between the cracks in the stone.

It was just then that the bells of the city began to ring.

I could take this opportunity to throw words at sound, catalogue the airy weight of the bells above the pastel city, but those words would fall false. Just picture this: sound as feeling. Present in each cell. Mingled with my mind, my eyes, with no barriers to sensation. 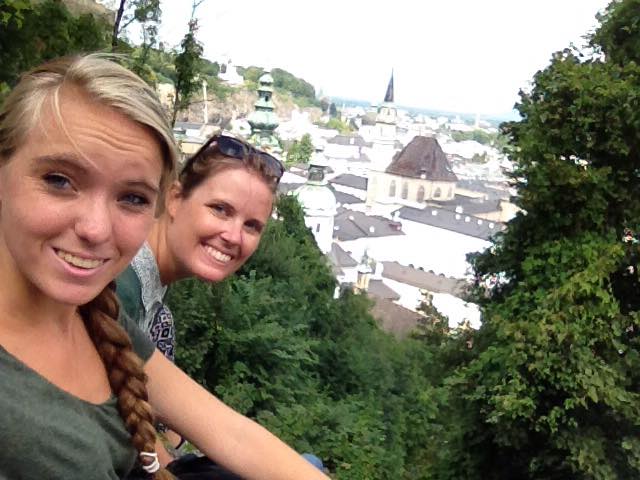 “Does this get old?”, I asked Michelle and Jen, silhouetted against the city from the other side of the wall. They had been traveling Europe for a month already.

“Could it?”, Michelle asked back.

I had had a rocky relationship with music, and it was only in the last month or so, following the Stepping Stone music festival, that I had started to trust it again, to leave myself open to the vulnerability of a created sensation. Now I came to the city of music fresh and blank. Sky above white stone. Trembling at the notes that hummed where they touched.

The night before, as Michelle and I had walked through the courtyards below the castle, the bright lines of sound from a violin had caught me mid-motion. The sound wound through my chest, pulling me with a power I was unable to resist, as strong and as subtle as threads of light. I followed the music across the cobblestones to the enclave where a man stood, his self irrelevant, easing sound from a violin.

That was what Salzburg was, I decided with Michelle, when the music had finally faded into the stone. Feet following music. 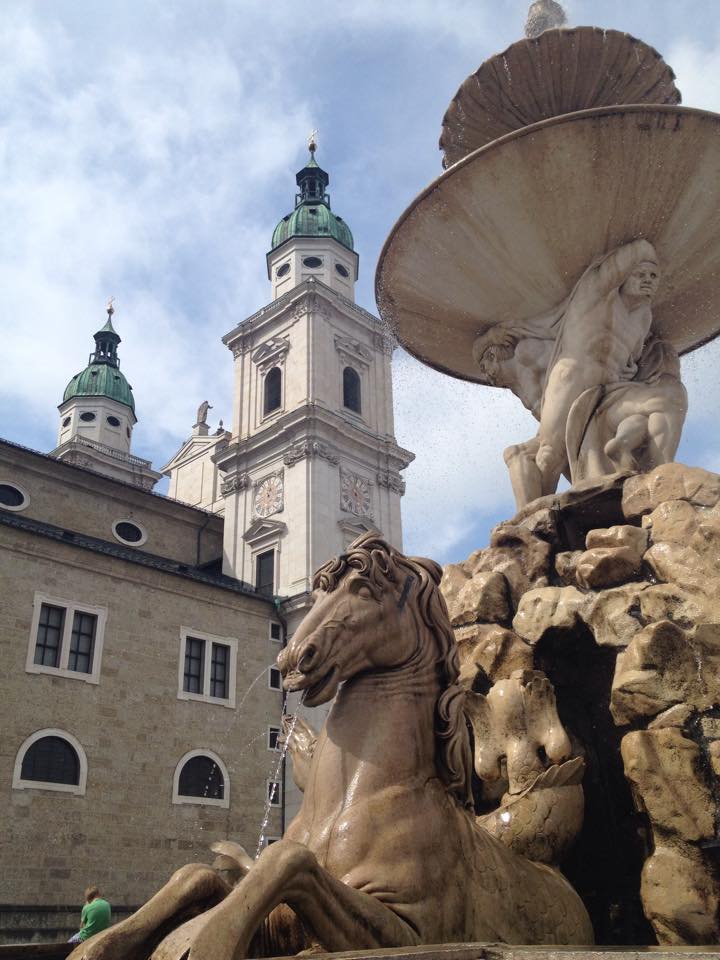 Back in day, we walked back to a smaller castle on a ridge, delirious with the feeling of sky and the wildflowers and the small fields far below. I ran into a field and a song ripped from my throat, gloriously cliche. The Hills- alive with the sound of music. 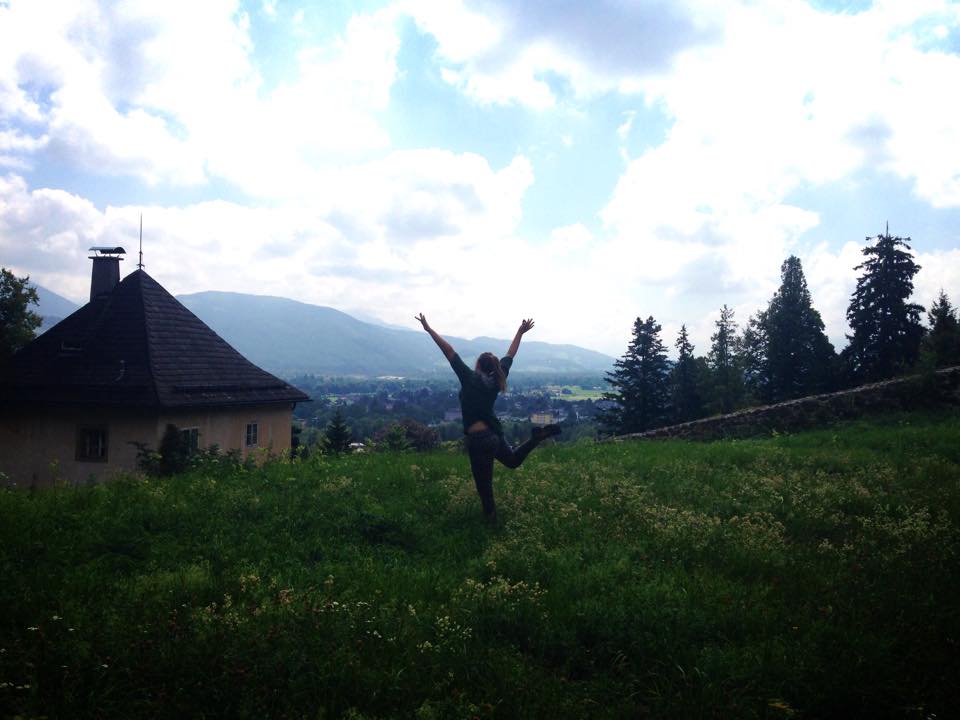 I didn’t even mind the nettles that stung my ankles later, as we ate sandwiches on a battlement over the tiny, tiny fields.

As we walked down to the river, the beat of a bass slowly grew out of the center of town, and we followed it across a bridge and past a market, down to the park festival where children tried on cloth fairy wings to the sound of a vocalist who ground out lyrics taut with honesty.

On the other side of the hill, a band played while the instructor for a local circus troupe balanced precariously, tightening ribbons around the branch of a large tree. 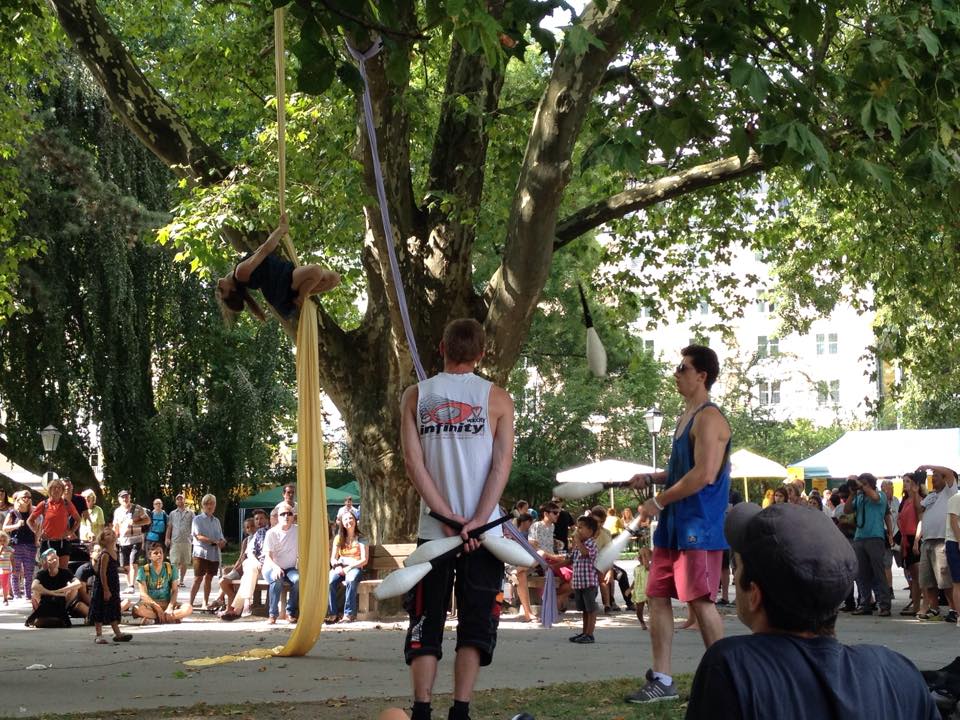 Below the park stretched bright gardens. We recognized one leafy tunnel from The Sound of Music. “Skip,” Jen ordered, holding up her phone to take a video. The family at the end of the tunnel was laughing when Michelle and I slunk back. “You need music,” the Dad said, playing “Do- re-mi” on his phone. 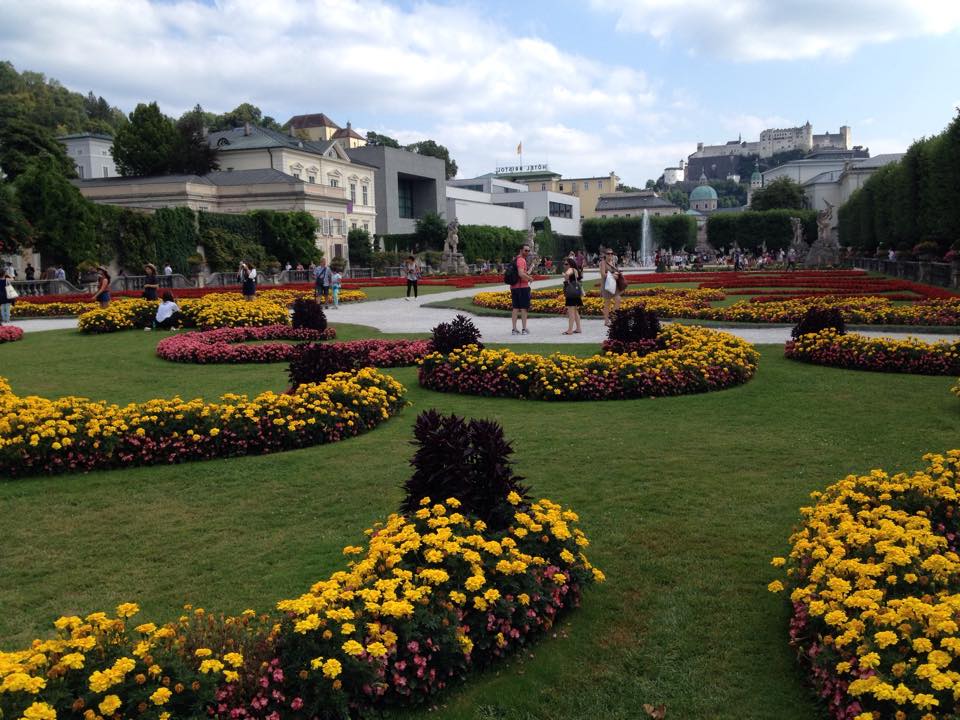 “It is not Mozart city, it is Sound of Music city,” the Mom observed.

“It is Music city,” I suggested, sheepishly.

By the time we’d found something to eat it was time for the festival to start, so we wandered back to the park, bought a beer, and joined the little picnic groups in applauding the tiny girls and boys who balanced on rubber balls, twirled in fairy wings and unicycles, and dropped from tall ribbons to the cheery din of circus tunes. 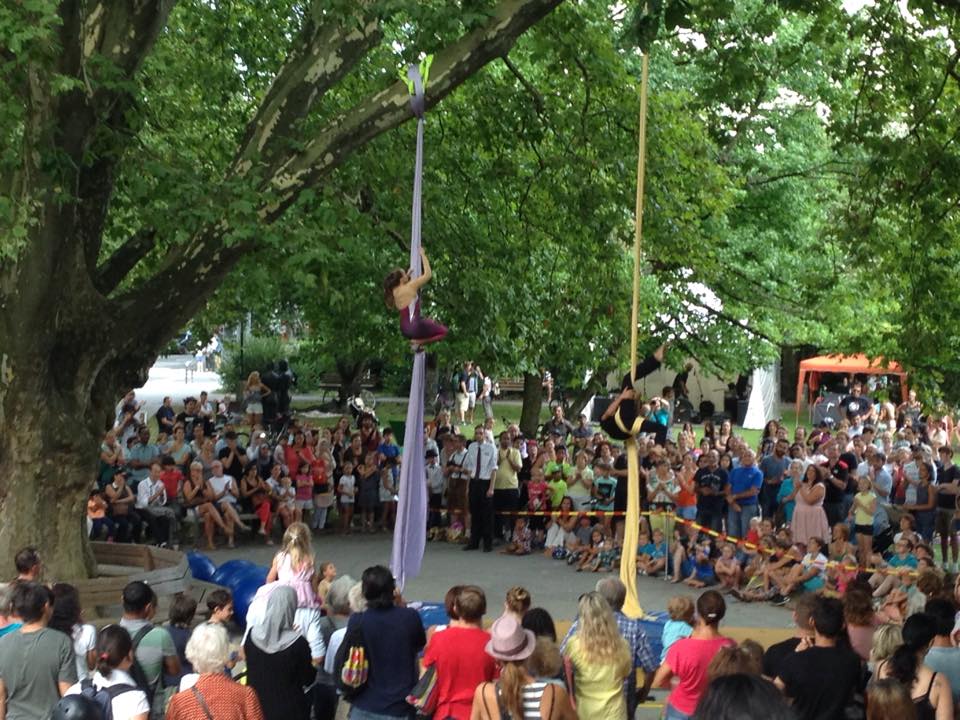 As the festival finished we made our way back below the castle for an outdoor screening of The Marriage of Figaro. Jen and I stopped, realizing we’d lost Michelle to her first enthralling street performer: a puppeteer whose skeleton marionette danced in ecstasy to “Tootie Tootie, Ahh Rudy.” “It just looks like he’s dancing,” she smiled as she caught up.

By now the clear magic of the music had started to wear with the wear on my feet, so Michelle and I left Jen to save our seats and moved off to play a game of outdoor beer pong with an irrationality attractive group of men gathered for their friend’s bachelor party. They invited strangers off the street to play: an adorable grandmother, three enthusiastic kindergarteners and their parents.

The game ended, we waved goodbye, and moved back to wait for the opera. As the clouds darkened around the castle above, the screen sank into the dark hues of an orchestra pit, and the music began.

With the overture came the tightening ache that this day had made so familiar, and I closed my eyes into the music. Then the screen moved to the actors, and I realized that under all the class and history of opera, the music took the form of something we all could understand: life, rough and physical, sometimes grand and sometimes raucous, underlined with emotions that waited somewhere beneath words. And in those emotions, heard or unheard, the ache of feeling reborn as music. 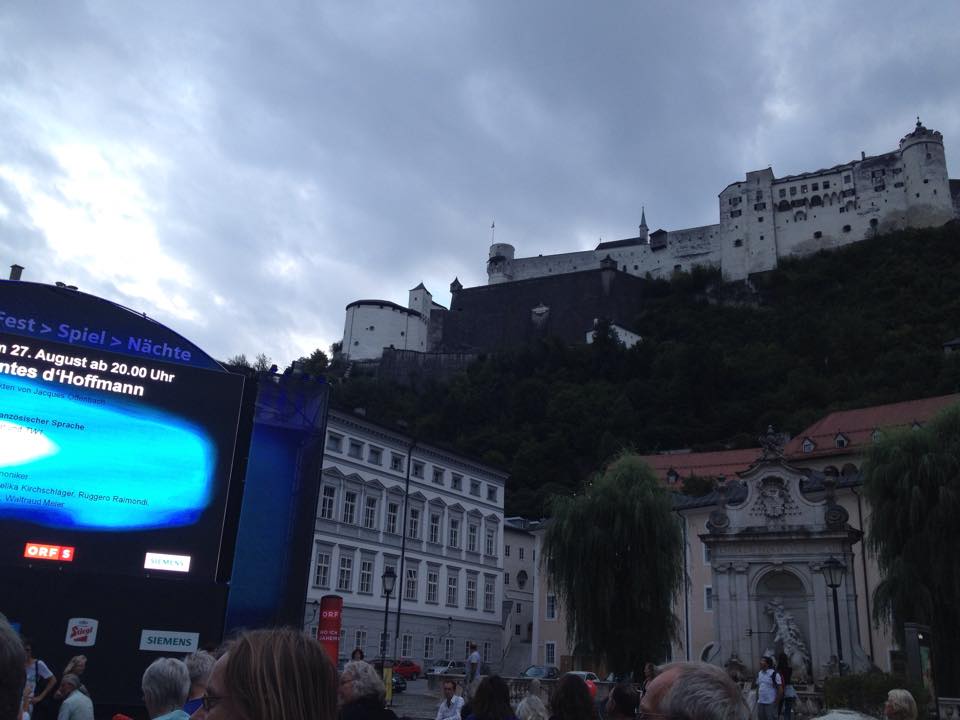 Salzburg, with its songs and hills and sung stone, seemed the most honest place to stand, Its music a vulnerability that demanded trust but gave life.

The next day, we took a bus and a train and a ferry to the lakeside town of Hallstatt, then dropped our bags and hiked up past the lookout point into the dripping clouds. Rain and the breeze conspired together, tapping music into each leaf. The stony peaks ached with silent notes.

And even the hills were alive with the sound. 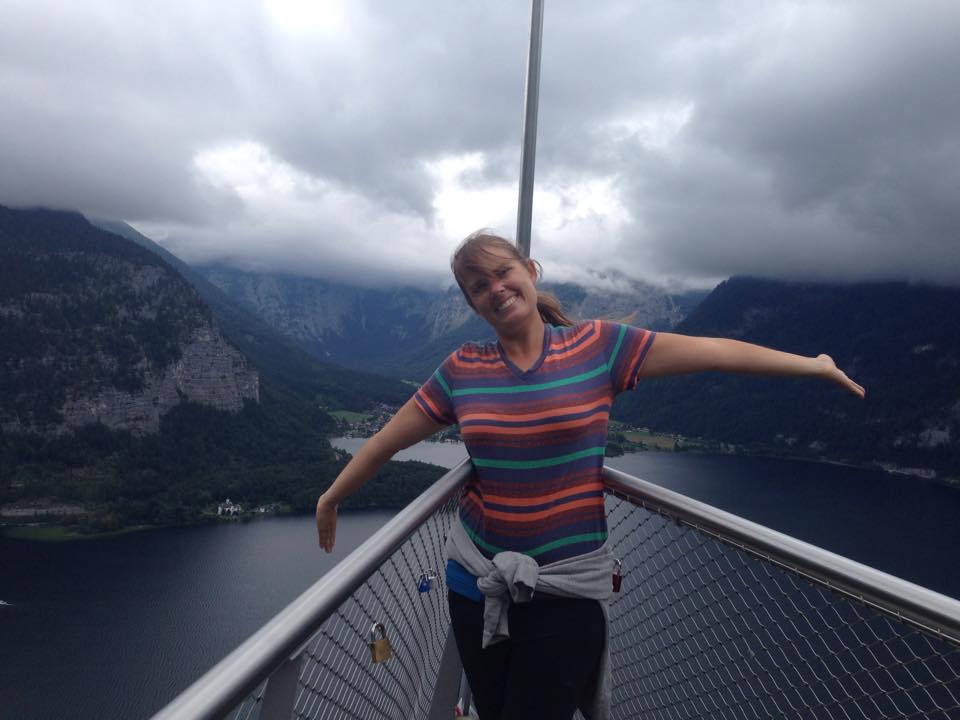 Have your own memories of music and travel? Comment below!